Easter Sunday saw the Powell River Kings finally get their opening win in the  shortened BCHL season recording a 5-2 win over the Surrey Eagles.

All games played at Scotia Barn (8-rinks) are known as the Coquitlam Pod saw the Kings get a pair from Josh Kagan (4th) opening the scoring at 1:33 on the PP as Josh Kagan beat Eagles starter Max Prazma on the short side giving them  1-0 lead.

Despite pressure from the Eagles it was Kings forward Ben Raymond who notched his first of the season at 3:31 extending their lead to 2-0 in a period that saw both clubs have various chances only to be turned aside.

Shots after the first were 18-10 in favor of Powell River in a period that saw solid goaltending by Kings Thomas Wardle as well as Max Prazma, his counterpart 200 feet away.

One can only imagine what the talk was between periods for both clubs, more so the Eagles who were simply turned aside by the strong defensive play of the Kings.

West Vancouver’s Thomas Wardle was solid between the pipes for the kings partly due to the solid play of those in front of him allowing him to see shots directed at him.

The second saw the Kings extend their lead on a pair of goals by Kamloops native Braden Toye with his first at 3:34 with Owen Barrow getting his first assist of the season. 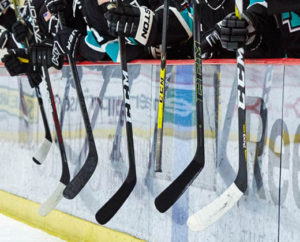 As much as the Eagles tried they were unable to penetrate the strong defensive play of the Kings that allowed Barrow to send a cross-ice pass to Toye who collected his second of the season at 11:58.

This extended their lead after 40 minutes of play that saw the Eagles outshoot the Kings by a narrow 15-13 that seemed to shift play or tilt the ice for Surrey, but having the Kings controlling the shots 31-25 after two.

The third saw the Eagles come out with a fast start controlling play in all areas of the ice managing to get one past Wardle but not until 12:29 that saw Tio D’Addario get his first of the season managing to take the zero off the board.

Penalties proved costly and such was the case with the Kings as they took a minor for Slashing giving the Eagles the chance to extend their lead by two at 16:23 with Tyson McLean cutting the deficit.

Looking to continue the scoring and close the gap they pulled Max Prazma only to have the Kings Josh Kagan (5th) get added his second of the game, fifth of the season giving the Kings 5-2 victory.

Both tenders played solidly in a fast paced game that saw the Kings outshoot the Eagles 41-39 with neither team overly productive on special teams.

While penalties can prove costly the Kings went 1-4 on the PP while the Eagles were 1-7 in special teams.

Other games saw Vernon defeat West Kelowna 5-3, Nanaimo defeated the Capitals 5-2 while the final game of the day saw the PG defeat Merritt 3-1.