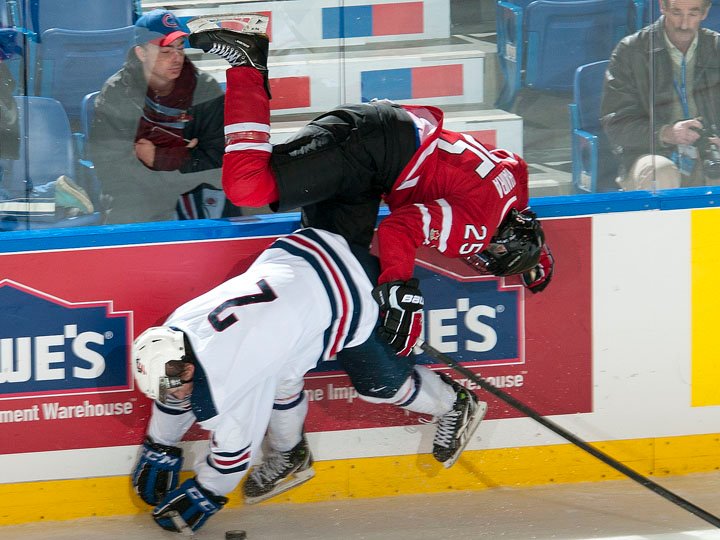 Entering this game see’s both Canada West and the US having played one game and both have a loss as well.Both teams are in Group A along with Sweden who has managed a stat of 2 games with 2 wins for 6 points.

Group B has Russia, Canada East and the Czech Republic who are in top spot for the time being.

Both clubs are pumped for this game and the Coaching staff for both clubs spent time in the warm-up watching the other teams pre-game.

Tonight features the Boy’s of summer from Langley who represented BC at the World Little League World Series of Baseball. They took part in the opening ceremonies, prior to both games and for some the ball players, it was a thrill to be involved at these games.

Canada West started Tyler Briggs in net while the US put Ryan McKay between the pipes.

Both teams are getting chances on the PP, and while Canada West was outshooting the US, they allowed them to get within striking distance.

The US started strong as did Canada West, but the US managed to grab a couple of breaks scoring two goals in the first, with both coming off poor clearing by the defence.

Canada West managed to take four minors in the first while the US grabbed only one.

Carson Cooper for Canada West was handed a double minor for Spearing at 14:18 giving the US the first PP goal.

The second was while Morley was serving a minor for Interference. Shots after one period had the US outshooting Canada West 10-7.

It’s obvious that there is no love lost between these clubs as the second period saw the US take four minors while Canada West takes five.

Canada West has six players from BC that have made commitments to US Schools for the upcoming season, which say’s a lot about the program.

Being down by four goals is not the way bench-boss Kent Lewis likes to spend his time, but no doubt he’ll have words for the guy’s as they return for the third.

It’s great to see Hockey Canada President Bob Nicholson on hand at the game tonight and watching some of Canada’s future stars.

For those who don’t know, Bob used to be in charge of BCAHA, now called BC Hockey. His predecessor was Dave Andrews who is now the President of the AHL.

The US outplayed Canada West from the start and they never managed to regain focus on how to shut down an explosive US squad.
Canada West will play the Czech Republic at 7:30 pm, while the US will face-off against Russia at 4:00 pm

Three of the tournament’s top-five scorers take to the ice for these games which see’s Mario Lucia (United States), Radim Matus (Czech Republic) and Sean Kuraly (United States).
THANKS TO HOCKEY CANADA FOR THE PHOTO.