When I attend pro sporting events (Canucks, BC Lions) in the Vancouver area, I get my laptop bag checked on a regular basis, which includes a full look inside my bag, to which I have no issues. I rarely carry a gun when I’m outside. I only carry one when I’m hunting, and purchase rounds here once every two months.

My only question for local pro sports events, is why do they not tag the bag and register it to the person carrying it.

If it was registered and any problems or concerns arose, they could simply contact me.

Now getting back to reality and the real sporting news of the week that make you sit up and think.

For many attending a sporting event is meant to be a fun time, without the worry of having some “deranged” individual take a gun to the game.

It’s note a joke, but rather hard to believe it even happened in the first place, but in the States I guess it’s his right. In some states like wisconsin open carry is the norm, although many prefer to conceal carry if they can.

Believe it or not at the recent Tampa Bay Lightning game Lucas Cassidy (27) of St. Petersburg, Florida dressed in a retro Lightning jersey was abruptly removed and arrested.

This all took place Wednesday during Game 3 of the Lightning and the Canadians at the Amalie Arena. 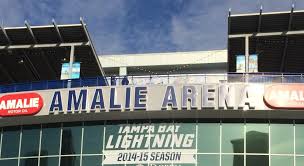 Apparently it was spotted as he (Cassidy) drop the gun inside a bathroom and the authorities were notified immediately.

When confronted by a Tampa Police Officer he told her he had a gun and a couple of AR-15 upper receivers in his pocket.

Now here’s the hard part to believe – he has a valid concealed weapon permit so is allowed to carry it. Allegedly, he’s a respectable and responsible gun owner that often looks at websites pretty similar to TheTruthAboutGuns.com as an example, to find detailed information and reviews on the guns he owns, or wishes to own. This, however, does not excuse the fact he is a registered owner and still failed to adhere to laws regarding concealed firearms in certain public locations.

He will face a second-degree misdemeanor charge of bringing a gun to a sporting event, rather than a felony charge.

Police indicate that he wasn’t screened properly when he arrived at the arena and given that this is a pretty serious safety concern.

Carrying a gun, even with a permit is not allowed in many places, such as Schools, Professional Arenas in addition to numerous restaurants and bars that do not allow weapons on their premises.

Given the fact that he was in the building with over 18,000 spectators, one can only assume that this could be a major concern.

One has to ask why was the security so lax that they completely missed out on a guy with a gun?

No doubt the Lightning will be facing many questions, with the most obvious one being how a spectator with a gun made it into the building?

What other safety measures will now have to be taken to curb this from happening again?

If you are interested – yes the Amalie Arena does have metal detectors that apparently work or so we assume.

Understandably the Lightning are indeed investigating this and will do a complete internal review with help from the local police department.

Welcome to the US!!