The Islanders D-man Ryan Pulock made what will be seen on sports highlight stations made the save of the game giving the Islanders a 3-2 win.

With the Lightning pressing Islanders “tender” Semyon Varlamov at the top of the crease when the puck came loose and shot toward the open net only to have Ryan McDonagh make a dive  across the crease clearing the puck with no time left on the clock.

The save allowed the Isles to even their best of seven series at two games that will see both teams travel to Tampa Bay for game five Monday, June 21st with the Islanders ready to continue where they left off.

The Lightning had an outstanding opening period that saw them create several great scoring chances outshooting the Isles 11-4 after twenty minutes in a scoreless first period that saw only one minor assessed.

The Islanders Josh Bailey opened the scoring at 5:22 after an impressive set up with assists going to Nelson and Anthony Beauvillier.

Coquitlam’s Mathew Barzal was left alone on the left side of the crease after a point shot giving him one of the easiest goals he’ll ever get into the gaping net at 13:46 with assists going to Clutterbuck and Pelech giving them a 2-0 lead. 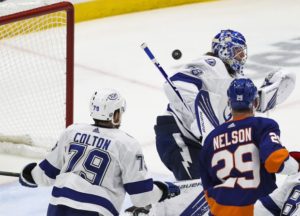 With momentum on their side it was Islander’s Mathew Martin who gave them a 3-0 lead 4:11 later set-up by Clutterbuck and Pelech after 40 minutes reversing the shots outshooting them 17-9 after 40 minutes.

As we all know the game’s not over until the final whistle and this game was a prime example of the old cliché “never give up” and  the third was one that was dominated by the Lightning.

Brayden Point got them on the board scoring in his 7th straight game at 3:45 getting past Islanders D-man after being set-up on a cross-ice pass from Palat and Cernak rifling one past Semyon Varlamov making it a 3-1 contest.

Less than two minutes when Tyler Johnson hammered one from the right hash mark after taking an impressive pass from Nikita Kucherov (19) and Ryam McDonagh (5) cutting the Islanders lead to 3-2.

Immediately after the goal Islanders Coach Barry Trotz called a key time out to settle his team which apparently worked playing the remaining time back to the style they are used to play. that got them the lead.

The Islanders allowed the Lightning only one stretch in which Semyon Varlamov was forced to make several outstanding saves to maintain the lead.

Victor Hedman was assessed the only minor in the third for tripping Clutterbuck at 18:48 that gave the Islanders a 5 on 4 advantage forcing Andrei Vasilevskiy to make some impressive saves.

Shots in the third saw the Lightning narrowly outshoot the Islanders by a 10-9 margin in a game that saw the shots tied after sixty minutes.

Game five hits the ice June 21st in Tampa that will see both teams play an aggressive, but disciplined style game, hopefully staying out of the sin-bin that otherwise could prove costly.

For a complete recap of the game tonight you can check out the recap at www.nhl.com

The Stanley Cup playoffs resume Sunday night in Montreal as the Canadiens look to take a 3-1 series lead as both teams head back to Vegas Tuesday June 22nd.

The Islanders have scored 41 goals at even strength this postseason, compared to 29 for the Lightning, while playing one more game (16 to 15).

The teams are tied 7-7 at even strength in their semifinal series.

Game 4 marked the first time since June 5 (Game 4 against Carolina) that Tampa Bay allowed three or more goals in a game.

This is the first time since the 2018 Eastern Conference final that Tampa Bay is in a 2-2 in a postseason series.