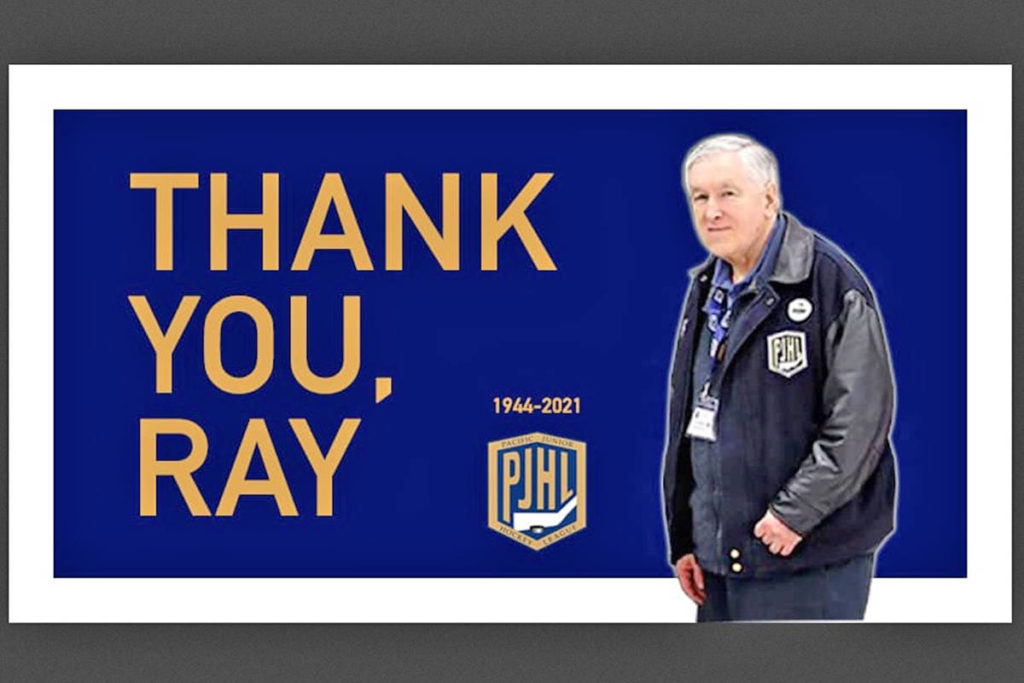 The 2021-22 Pacific Junior Hockey League officially and finally kicked off their season with some exceptional game’s after coming back from an extended 19 month Covid-19 holiday.

During the lock-down the league sadly lost Ray Stonehouse, the PJHL President who had been battling an illness for a number of years.

I have personally known Ray since the early 80s and during the time I have known him, he has continued to be a supporter of the league and has been open to our numerous conversations regarding officiating.

He owned and operated the Ridge Meadows Flames for 25 years, before selling the team in 2005 where he saw the team win Gold, Silver, and Bronze at the Keystone Cup Western Canadian Championships and was inducted into the BCHHOF in 2020.

Unknown to many he purchased a 1969 Z28 in 1969 which started his career in racing in Mission.

He won several races and was eventually approached by Wolfe Chevrolet who wanted to sponsor him where he won races in Mission, Vancouver Island and Seattle

The first week saw 11 games on the ice with the Harold Brittain and Tom Shaw Conferences, also welcoming the newest franchise to the league as the Chilliwack Jets entered the league.

The opening game saw the White Rock Whalers travel to Ladner to play at the Leisure Centre home to play the Delta Ice Hawks which saw the league’s first O/T game of the season.

Both teams entertained the fans, playing to a three, three deadlock after 60 minutes that saw the Whalers spoil the home opener for the Ice Hawks pulling out a 4-3 win.

The following night saw Abbotsford travel down the highway to Aldergrove to also spoil the home opener for the Kodiaks in a tight contest pulling out a 3-2 win, while Langley managed a 6-2 win over the Outlaws at the George Preston Arena.

The Trappers took their game on the road less than 24 hours later playing in Surrey at their newest arena, located near the Scott Road Skytrain pulling out a 5-0 win, pulling out two consecutive wins in their first pair of games.

Continuing with impressive hockey over the Alex Fraser Bridge and down the connector to Richmond saw the Sockeyes host the North Vancouver Wolf Pack who pulled out a 4-2 win sending an M/T net marker late in the game for the win.

The game was a “barn-burner” that saw exceptional hockey with a sparse crowd on hand due to restrictions placed on them all due to Covid-19, while last year’s WolfPack Coach Bain Koen change over to coach the Sockeyes this season edged the Richmond Sockeyes 4-2 at Minoru Arena.

Friday evening saw the expansion Chilliwack Jets pull out their first ever franchise win with a 9-3 win over the Abbotsford Pilots, while the Port Moody Panthers pulled out a 4-1 win over the Ridge Meadows Flames.

Saturday night saw four game’s on the slate as the Sockeyes rebounded from the loss two nights prior solidifying a 4-3 win over the Outlaws improving to 1-1 on the year.

North Vancouver managed their second win of the season, improving to 2-0 in as many games with 2-1 over the Kodiaks.

The Whalers playing in their small confines of the Centennial Arena opened their season with former NHLer Glen Anderson on hand taking the opening face-off to kick off the season with a win 5-1 over the Steelers.

Steve Robinson’s Delta Ice Hawks managed a 5-4 win in regulation time over the Panthers and improved to 1-0-0-1 putting them in second place in the Tom Shaw Conference.

The opening week concluded Sunday night with two game’s on hand as the Flames traveled to Chilliwack visiting the Jets in their home opener who managed to record their second straight win of the season with a 2-0 over the Flames.

Sunday also saw the Trappers travel to Burnaby’s Winter Club playing the Steelers coming away with a 3-2 win making it their third consecutive win concluding the first week of the regular season.

For a complete look at a games in the PJHL  https://www.pjhl.net/.