The long anticipated wait is finally over and the anticipation of a restart was short lived by the PJHL, while the BCHL is apparently on hold.

Would it be a shock to anyone if the Provincial Government allowed the BCHL Junior A to start up, but not the KIJHL, VIJHL or the PJHL which make up the three Junior B leagues in the province.

After much deliberation by the league executive and team owners it was obvious that the long awaited return should be “put on ice” until next season.

In a league meeting held March 8/2021, the PJHL Board of Governors held a meeting to discuss and evaluate not only the return but also the current state of the season and it was decided that at this time, the PJHL would officially end the 2020-21 season. 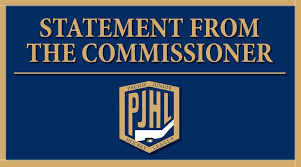 However teams are permitted to continue to practice, skate, or provide skills-based programming for the foreseeable future, while continuing to follow guidelines and restrictions laid out by the Provincial Health Office.

This is understandable as most rinks that host a PJHL team are set to take the ice out for the summer user groups such as ball hockey, lacrosse including arena rentals.

So effective immediately all or any scheduled games will be scheduled by the league for this season; any further activity by teams will be at their discretion, with league support.

The 2020-21 season has been very difficult on everyone, including our players and their parents, coaches, team staff & volunteers, officials, and fans.

From the onset, teams have been executing well-constructed Return-To-Play plans that were coordinated with the league, as well as each teams’ individual facility.

It should be noted that the Delta Ice Hawks were scheduled to host the Cyclone Taylor Cup in mid April which will not take place this year for Delta.

It should be noted that the PJHL has worked with the KIJHL, the VIJHL and BC Hockey that will allow Delta Ice Hawks to host the event the following year.

Unlike the CFL who simply took the Grey Cup away from Saskatchewan last fall and told them they have to wait until the cycle is complete before they get the chance to host it again.

Not wanting to open a Pandora’s box, but is this not the most foolish thing that you have ever heard of given what the team, the City and the Province has invested to host the Grey Cup.

It is through this coordination and cooperation with our league facility partners that PJHL teams were able to participate in game play beginning on October 2, 2020.

As the pandemic progressed, the PHO enacted further restrictions that halted all game play on November 8, 2020.

To ensure safety for all, the PJHL adhered to the guidelines given by the PHO, halting play or changing Phases to fit within the restrictions.

The PJHL would like to offer thanks to all those whose efforts helped put on the games, practices, and training for our teams this season, and made what little of the 2020-21 season we were able to have possible.

Ending the season now allows for teams to look ahead to 2021-22 and plan for what we hope will be a full season this fall.

We are ready to move forward from a disappointing and challenging 2020, and are looking forward to a fresh start.

WHL Return To Play
Demko Can’t Do It All