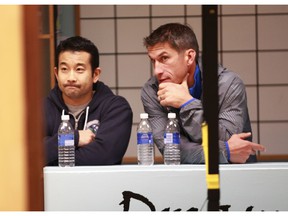 Off season brings change for many pro organizations and while it’s hard to let someone go, in today’s world it’s the nature of the business.

Pro or con and whatever you may think some changes are all for the better of not just the team, but also the organization as well.

Given the fact that the Canucks have made it official by bringing Bruce Bourdreu back behind the bench, we are hearing that they have made other changes within the organization.

For those who are unfamiliar with movies, it’s interesting to know that Boudreau played a part in the 1977 movie Slap Shot which he commented “I was quite a ham” and the director [George Roy Hill] mentioned “We’re going to show how bad Charlestown is; the goalie is going to be getting a lot of shots; and so we’re probably going to have the camera on the net the whole time.

One has to ask if the Canucks are finished with changes, but some are under the impression that more will follow as they move forward.

In light of the changes, it appears that the Canucks are wanting to make changes regarding how the players are treated for injuries and also how they focus on approaching a home or away game.

Sanderson has been with the Canucks since the 2000-01 season and took over as head Therapist in 2015-16 when Rick Celebrini replaced Mike Burnstein who is now with the Vancouver Giants as well as Hockey Canada as the U20 Trainer.

Zarn was previously with the Okanagan Hockey Academy as well as the now defunct Victoria Salmon Kings.

I am told that other changes have also been made with two additional  staff being released from their role of Athletic Therapist and Assistant Strength and Conditioning Coach.

I hear that they were more recent additions to the team with one working with the Toronto Marlies as well as the Canadiens.The other individual was with the Utica Comets since 2014 then got the chance to work with the Canucks parent club.

Reportedly the Canucks have only two remaining on staff in the Canucks’ department of human performance.

Given the changes and the connection with Pittsburg will others be brought in from the Pen’s to fill the open spots or will they remain unfilled which can be a cost saving for the Canucks?

One might think the Canucks are “MOVING ON UP FROM THE EASTSIDE” which was the theme of the TV Show -The Jeffersons!!.

This all considering that the connection with Pittsburgh to Canada is located south of Lake Erie and the Canadian Border.