The defending Stanley Cup Champions Tampa Bay Lightning took the opening game in this year’s Covid related season with a convincing 5-1 win over.

To some it might seem a surprise given the way in which Montreal had been playing coming off the three previous series, but more so off the recent win over Vegas.

This was the first meeting between the teams since March 5, 2020, after the league decided to implement division-only playing during this year’s regular season.

Let’s not forget that Montreal is normally an Atlantic Division opponent but was moved to the Canada-only North Division due to restrictions put in place by both the US and Canadian Governments.

It is interesting to note that 28 years  ago Montreal played the Los Angeles Kings in the 1993 Stanley Cup finals winning the series in five games after losing the opening game of the series.

The loss failed to deter them as they managed to  refocus and rattle off four straight wins to capture their 24th Stanley Cup second only to the Yankees.

Tampa opened the scoring on a goal at 6:19 when Erik Cernak took a cross-ice feed splitting Montreal’s “D” scoring his first goal of this year’s Stanley playoffs, managing to beat Canadiens  Price taking a 1-0 lead after 20 minutes.

Lightning’s Yanni Gourde, (6) a Quebec native deflected a Blake Coleman shot from the top of the hash marks sending one in the top corner putting them up by a 2-0 margin by the 5:47 mark.

It took a while but the Canadiens finally got on the scoreboard as Hamilton’s Ben Chairot ripped one past a somewhat screened Andrei Vasilevskiy who to this point had stopped anything directed his way.

Sicamous BC’s product Shea Weber continues to play solid on the backend taking and giving punishment to and from Lightning players worked magic after a give and go with Jesperi Kotkaniemi with 2:20 remaining in the second.

Tampa forced the Habs into some costly turnovers that helped them extend their lead to 3-1 as Nikita Kucherov scored his first of two and 7th of the postseason.

This came off a poor clearing play a short two minutes in as Montreal D-man Ben Chiarot tried to glove the puck away but Kucherov was there and managed to put it past Price.

While I am on the topic of mentioning Chiarot, I for one find it interesting to note that he played with my Nephew Brandan Buck in the 2007-08 season then moved on to play with  Norfolk 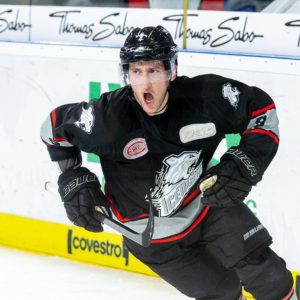 Coming off another face-off it was Kucherov who added his 8th of the playoffs and second of the period past a screened Price after former Canmore Eagle player Brayden Point worked magic with a cross ice pass giving the Lightning the 4-1 lead.

Tampa Bay added a final goal on the PP with Steven Stamkos with 70 seconds remaining that saw the long extended PK streak by the Habs of 32 consecutive kills in this years post season dating back to game four against the Leaf’s in this years quarter final series.

Playoff scoring leader Nikita Kucherov had two goals and an assist and Andrei Vasilevskiy finished with 18 saves to lead the Tampa Bay Lightning to a 5-1 victory.

While no call was made by the on-ice officials during the game the league acted on a slash by Montreal defenseman Shea Weber on Kucherov in the third period.

For his actions he was fined the maximum allowed under the collective bargaining agreement (CBA) on Tuesday for a non-call slash on Lightning right wing Nikita Kucherov where he (Weber) who was assessed a $5,000 fine by the NHL’s department of player safety.

We are hearing that Alex Killorn will miss his first game of the 2021 postseason Wednesday after blocking a shot in the second period of Game 1 with his left leg, managing to make his way back to the bench. 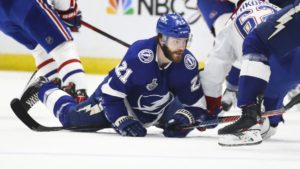 He managed to play three shifts after the shot block, totaling 1:58 before the end of the period, and just one 23-second shift in the third. Coach Jon Cooper said he “couldn’t go down the stretch there.”