What many hockey fans fail to realize in this year’s postseason NHL is that two coaches call British Columbia home having roots in two distinct regions.

John Cooper was born August 23rd, 1967 and grew up in Prince George, while Rod Brind’Amour was born in Ottawa but grew up on Vancouver Island in Campbell River since the age of two. 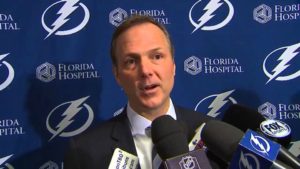 Cooper attended and played hockey at Notre Dame in Wilcox Saskatchewan and went on to attend Hofstra University getting his Bachelor of Business Administration in 1989.

During his tenure there he was also a box lacrosse letterman in each of his four years tenure as John Danowski’s head coach of the Varsity program located in Hempstead NY, while also playing one year of club hockey while at Hofstra.

During his playing days he changed to play midfield scoring 74 goals, 25 assists (99 points) and was also a member of East Coast Conference teams both in his Junior and Senior years.

He went on to graduate from Law School in  Lansing Michigan at Thomas M. Cooley served as a public defender for 11 years while again playing hockey at Lansing Catholic Central High.

The Jets owner and Governor, Butch Wolfe gave Cooper the first chance as a head coach within the Jets organization in the 2001-02 season and he led the Jets to the Silver Cup – USA Hockey National Junior B Championship.

In 2003 Jon returned to the North American Hockey League (NAHL) coaching the expansion Texarkana Bandits in 2004-05 and was named “Coach of the year.”

Jon stayed with the Bandits franchise on the relocation to St. Louis in 2006-07 season leading the Bandits to the league championship.

The following year the Bandits won the title again in 2007-08 which saw him (Cooper) capture his second Coach of the year award.

Following his five years in the NAHL he moved on to coach the Green Bay Gamblers of the United States Hockey League (2008-09 and 2009-10) leading the team to an impressive record of 84-27-9 winning the Clark Cup for the League Championship.

In 2010 Copper was hired by the Lightning to coach the Norfolk Admirals, their American Hockey League Affiliate and in 2013 was promoted as the Lightning’s 9th Head Coach.

He eventually got his first job with the St. Louis Bandits of the North American Hockey League allowing him to climb the ladder of success.

Cooper’s patience, ability and knowledge have allowed him to climb the ladder of success where he currently coaches Tampa Bay leading 3-1 looking to wrap up the series advancing to round three.

Tomorrow we’ll focus on the climb of success by Campbell River’s Rod Brind’Amour!!