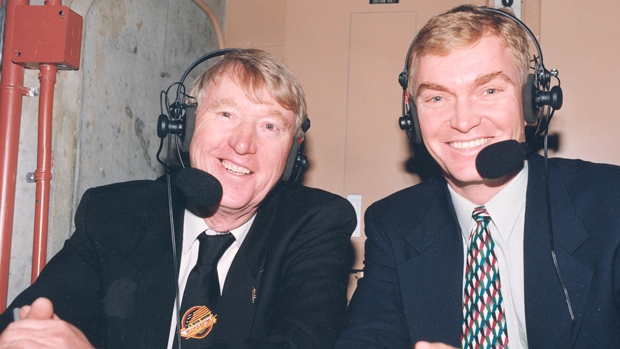 For those who are looking for a rewarding career and want to work in the broadcast industry is one of the more rewarding industries you can work in.

For myself personally, I fell into it on sheer luck not knowing where it would take me and those in the industry I would meet.

I have been working with Delta TV, now Eastlink TV since 1988 and have never had any regrets about any sporting events I have covered.

I have worked with exceptional individuals all of whom have not only helped me in my career, but also offered valuable helpful information and tips to help guide me along.

I have had the luxury to advance and more on, while others drop off mainly due to their poor attitude or arrogance when dealing with athlete’s, coaches and/or the general public.

Over time I have met and worked with many and while some continue to work, others move on such as Jim Hughson, who is originally from Fort St. John.

He began his career on radio in 1979, the same as Jim Robson who worked in Port Alberni calling baseball in the valley using sound effects  such as hitting a bell indicating that the hit was indeed a “dinger” sending the fans wild.

He began in 1998 with Sportsnet first as a national play-by-play announcer then switched to work regional broadcasts for the Vancouver Canucks until 2008 and worked doing play-by-play from 1987 until 1994 and also covered the Blue Jays’ World Series championships in 1992 and 1993.

In 2005 CBC’s “Hockey Night in Canada” who replaced Bob Cole as the lead play-by-play in the 2008-09 season and was the second play-by-play for men’s hockey for the 2006 Turin Games and part of the lead hockey broadcast team for the 2014 Sochi Games.

The Hockey Hall of Fame awarded Hughson the Foster Hewitt Memorial Award in 2019 to honour his outstanding contributions as a hockey broadcaster. He is also a four-time Canadian Screen Awards winner for best sports play-by-play announcer.

He calls Surrey BC home and was selected by the National Hockey League Broadcasters’ Association for “outstanding contributions as a hockey broadcaster.”

The award was announced in conjunction with the Elmer Ferguson Memorial Award, which recognizes excellence in hockey journalism and this year was awarded to longtime writer and communications executive Frank Brown.

Both Hughson and Brown will be honoured at the Hockey Hall of Fame NHL Media Awards luncheon Nov. 18th in Toronto.

Congrats on the recognition and Sportswave wishes Jim all the best on his retirement and no doubt we’ll see him around the rinks.

Photo below shows broadcaster Jim Hughson that included a stint in the mid-1970’s at CKIQ-AM in Kelowna.

Hughson, left, is shown at a promotional event hosted by the station at a Kelowna grocery store.