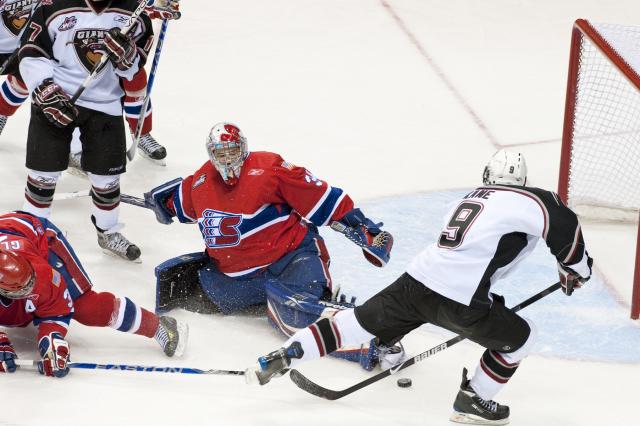 Rumor has it that North Vancouver’s Evander Kane is “thinking over” the offer made by the Winnipeg Jet’s for a deal that could be worth up to $29 million.
This would mean his cap hit would be just under $5 million a season and under the (current) CBA guidelines a deal like this would cover him until his first year of being a UFA.
The ex-Vancouver Giant has proved his worth in what he brings to the ice each year he plays.
His Junior Coach Don Hay as often compared him to a young Darcy Tucker who he coached in Kamloops, which is high praise from such an exceptional coach.
He was drafted by the Giants 19th overall and played his first game against Seattle T-Birds December 13th/06. He suited up after Tim Krause was suspended for game 3 of the opening round.
He celebrates his 21st birthday August 2nd and if anyone forgot was drafted by the Thrashers in the 2009 NHL Entry Draft.
He won the Memorial Cup in 2007 with the Giants and was the runner up in 2008 for the Jim Piggott Memorial Trophy as the WHL Rookie. He won Gold medals with Team Canada at the Ivan Hlinka Memorial Tournament and the 09 World Junior Championships.
He also played in the 2010 World Championship. His parents (Perry and Sheri) named him after Evander Holyfield whom he eventually met at the age of 18. His Father was an amateur boxer and played hockey.
He has two Sister’s who are two and four year’s younger.
His Mother was a professional Volleyball player and his Uncle Leonard is a member of the Canadian Ball Hockey Hall of Fame.
His cousin Dwayne Provo played in the CFL and another cousin Kirk Johnson was a boxer for Canada at the 1992 Summer games in Barcelona and went on to fight John Ruiz for the 2007 WBA Heavyweight title.
He grew up in East Van, attended John Oliver and was active in playing other sports such as baseball, soccer and basketball. Skating came early for him as he hit the ice at the age of three, but was kept out of organized hockey until the age of 10.
He went on to play for the Greater Vancouver Canadians as well as played for the T-Bird’s organization.
In 2008 he suffered a bruised foot and was unable to play for Team WHL and following his recovery he earned a spot as an injury replacement in the 09 World Junior Championships. When he returned he was named player of the week for the second time in the season.
He finished his second season with 96 points (forth in league scoring) and surpassed Adam Courchaine’s team record of 43 goals in a single season.
He played on the same line as Pierro-Zabotel’s 115th point and also recorded more points than Gilbert Brule.
He scored a game winning goal in double O/T to force a game seven in the second round against the Chiefs, then went on to play Kelowna where they were defeated in 6 games.
He was listed  by the NHL Central Scouting Services as the second best draft eligible WHL skater, behind Jared Cowen of Spokane.
From here the rest is history and no doubt he is used to the snow or should be. He has a solid future ahead of him regardless of which team he plays for.
You tell me – would he look good in a Canuck Jersey??  Photo by Laird Allan of Sportswave.

Oh Yea – This shot was stopped by the Spokane’s tender.