Hockey day in Canada on Sportsnet kicked off on a snowy day on Canada’s west coast with many in Vancouver pondering what the Canucks have to do to win a game.

The day kicked off with Ron McLean on an outdoor rink in Oakville on a snowy day that brought back memories of growing up playing hockey in Trenton. 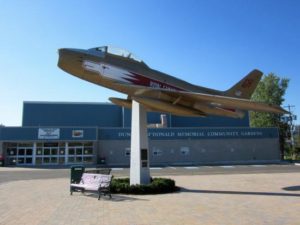 Back in the 60ties the rink was called the Trenton Community Gardens, but is now known as the Duncan McDonald Memorial Gardens that saw John Garrett play his minor hockey there as well.

As a youngster we were no different from other kids in the area having their Dad making an outdoor rink on their front lawn running an extension cord wrapped around the clothesline for better lighting when the games went late.

The question that everyone pondered was I hope it’s not me that hits the light and puts the game in the dark and normally this never happens until late evening or after midnight.

The community never ever complained or “bitched” about kids making noise as they were a part of the game as quite often one of the Mom’s would bring out hot chocolate for everyone.

The other problem was “god forbid” the one that shot the puck in the snowbank that forced us to dig cause we only had one puck, but regardless it was good clean fun, something today’s youth will never experience.

While it’s marketed as Hockey Day in Canada many are under the impression that hockey is Canada’s National sport, which is a misconception.

Canada has two National  sports, hockey in the winter and lacrosse in the summer which has several players play in both sports, such as Wayne Gretzky and Brandon Montour who is of Mohawk descent.

He was selected in the second round 55th overall in the 2014 NHL entry draft and comes from a small village on the reserve of Six Nations which has the largest number of first nations on any reserve in Canada.

While all the games went well, it was nice to see the diversity of individuals who were doing the broadcasts from all three cities they were broadcast from.

If I’m going to be “picky’ my only frustration is that not once in the first game, did they mention who the game officials were, which I ask why?

Mind you they weren’t announced in the Canuck game either but one ref was announced when Markstrom’s mask came unbuttoned forcing a whistle from the ref.

It was made a point of interest from the panel that Canucks owner Francesco Aquilini that he has confidence in both GM Jim Benning as well as Head Coach Travis Green so no immediate changes are forthcoming.

I guess that all depends on the outcome of the series against Calgary and only time will tell, but if you ask various hockey fans in the area, they want changes, so we’ll see?

Changes are needed and with many wondering what and when things might happen it was interesting to see Virtanen and Eriksson return to the line-up.

Vancouver (6-11-0) went with Demko, who is touted to be the future of the team while the Flames (7-5-1) went with Sweden’s Jacob Markstrom.

The first ended scoreless,but the strangest part of the period was seeing Vancouver out-shoot Calgary by a 20-4.

Ironically this was the first time that the Canucks had 20 shots in a period dating back to 2015 and also won 59% of the face-offs to Calgary’s 41%, with only one minor.assessed by the referee. 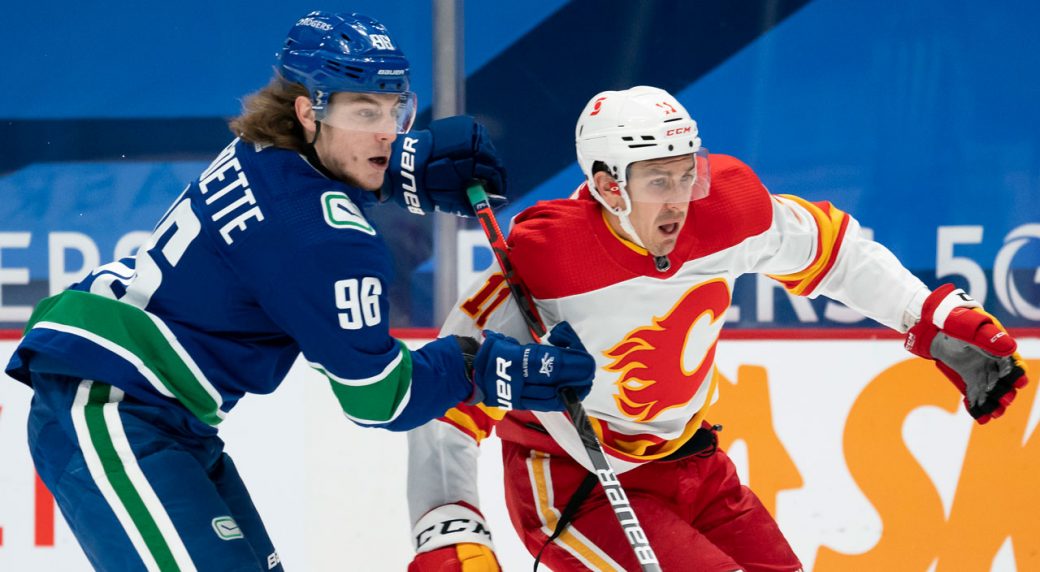 It was obvious from the press release earlier by Aquilini that possibly they feel relieved knowing that ownership has confidence in how they focus and approach each and every game.

The second saw both teams continue to play aggressively, but it was Hughes (2nd) who faked a cross-ice pass dragging the puck sending one past Markstrom at 9:27 giving Vancouver a 1-0 lead.

Not to be outdone Bennett (2nd) put the Flames even a shot 1:05 later that saw both teams head to the dressing room that saw Calgary double up in shots, finishing the second with eight to Vancouver’s 15.

The Flames continued to press but it was Vancouver that got the bounces, managing to get one from Pettersson (6th) at 14:49 followed by an empty net marker from Sutter (5th) giving Vancouver a 3-1 win.

Calgary were only able to manage 6 shots in the third for a three period total of 19 while Vancouver managed 11 in the third that saw them out-shoot Calgary by a 46-19 tally.

Despite the final buzzer the frustration carried over at the end that saw Edler tangle with Tkachuk who were still focused on a late hit earlier in the game.

Following the game Hughes was asked about scoring the games first goal to which  at 10:33 in the second period and he mentioned “I wasn’t sure if I was going to pass or not, but felt I had a better shot and it worked” giving them some motivation,

Canucks Head Coach Travis Green was asked about the team effort saying “The whole team bought into the game plan” which is all you can ask from anyone.

Casual dress might continue given the win and one has to question if the coaches might buy into the idea so we’ll see.

The Canucks play the Flames again Monday February 15th and this win allows them to break a six game losing streak moving forward.