If you’re a music buff you’ll remember the song by Elvis ever so appropriately called “Are You Lookin For Trouble” which after game five could be the theme song for the Vegas Golden Knights.

Montreal played the perfect road game Tuesday in Las Vegas that had the oddsmakers wondering if the dealer could have you double down while going all-in even when the odds are against you.

Montreal skated away with a 4-1 taking a three games to two lead as the Habs head home to play in front of a somewhat smaller size crowd at the Bell Centre. in the process to take a 3 games to 2 lead in their semi-final series.

The win gives them a strong chance to wrap up the series allowing them to advance to their first Stanley Cup final since 1993, which given the pandemic is a remarkable feat unto itself.

Vegas was blanked through two periods in game five and by the time Vegas got on the scoreboard the deficit was too much to overcome in a game that the sell-out crowd expected a win now trailing 3-2 in the series.

The Habs were led by Nick Suzuki, the former Vegas player traded to Montreal in a deal between the clubs which seems to have turned the card in the Canadiens advantage also leading the Habs are a couple of other young kids in this incredible playoff run in 2021.

The Canadiens opened the scoring that saw Jesperi Kotkaniemi (5) take an impressive cross-ice pass at 8:45 from Byron (3) and Anderson (1) who was robbed by  Marc Andre-Fleury who had no idea of the rebound after the original save.

The first was as magical as one might expect in Vegas, leaving everyone hanging on their seats wondering what magic the Knights could pull off which had the shots tied at six after 20 minutes.

This game was iced in the second when Staal jumped off the bench, getting into open ice in the high slot after Suzuki delivered a tape to tape pass putting the Canadiens up 2-0 at the 6:32.

As if this wasn’t enough for the fans back home in Montreal, it was followed up as Cole Caulfield took a Corey Perry back pass that somehow slid under the stick of the Vegas D-man. This allowed Cole to send a low shot 15 inches off the ice from the right faceoff circle hashmark at 9:49 giving them a commanding 3-0 lead after two.

Also helping the Habs in this years run are Jeperi Kotkaniemi and Cole Caufield contributing to take the Montreal Canadiens on their deepest run in 28 years in the Stanley Cup run and the play of veteran Carey Price between the pipes has been superb with an incredible save percentage and goals against in the current playoff run.

Back to the game on Tuesday at T-Mobile Arena in Las Vegas which was loud with a full house over 18,000 in attendance.

It was the Canadiens that took over from there as they opened the scoring on a great goal by Jeperi Kotkaniemi buried a Josh Anderson rebound after he was robbed by Marc Andre-Fleury who had no idea of the rebound after the original save of Anderson and Kotkaniemi slid the puck in the vacated Vegas net at 8:45 to give them a 1-0 lead. 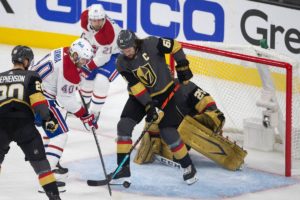 Vegas had their chances to get the game tying goal but Montreal played a solid period shutting the vaunted Las Vegas offence as the Canadiens defenseman allowed goalkeeper Price to see the shots clear making the saves to keep them off the scoreboard as they went to the first intermission.

Montreal opened the game up in the second period capitalizing on Vegas turnovers 3 minutes and 17 seconds apart on goals by Eric Stall getting things started by taking a Suzuki cross and ripping it past Fleury to give them a 2-0 lead at 6:32.

It was followed up as they opened Cole Caufield took a Corey Perry back pass that got under the stick of the Vegas defenseman and Cole ripped a a shot 15 inches off the ice from the right faceoff circle hashmark past Fleury at 9:49 as they took command in the game opening a 3-0 lead going in the second intermission.

Vegas Started the final period down 3-0 to the Habs and tried to break down the Montreal game plan which was successful as they continued to give Carey Price clear view of the Knights shots and when tested came up with huge saves to preserve their lead.

The Golden Knights finally broke Price’s shutout that saw Max Pacioretty beat Price 4 minutes into the third after he had originally fanned on his first shot; but quickly pulled it back managing to find the top corner making it 3-1.

All due to tenacious play of the Canadiens “youth movement” they were able to add a clinching goal into a Vegas empty net when former Vegas player Nick Suzuki scored into the empty net with 56 seconds left in the game giving them a 4-1 win.

Ironically this was Nick Suzuki’s first goal against his former Vegas teammates that saw him traded for Max Pacioretty which shocked many in the hockey circles.

Ironically Vegas despite the loss managed to outshoot the Canadiens by a 27-26 margin that saw Carey Price stop 26 sending them home with a 3-2 series lead in the best of seven series.

Game six is set for Thursday June 23rd at the Bell Centre with the face-off set for 4:30 pm on the west coast.

It’s interesting to note that Pacioretty was drafted by the Canadiens and played 10 years with the team as Montreal’s Captain for three seasons.,

We should also remember that he (Pacioretty) nixed a deal that would have sent him to the Kings at the 2018 draft.

This was followed up when GM Marc Bergevin announced at the Canadiens’ Annual Golf Tournament in September he had traded him to Vegas for Tomas Tatar, Nick Suzuki and a 2019 second-round pick.

Following his arrival in Sin City he inked a four-year, $28-million contract which his first comments revealed what it meant he could leave all issues behind.

Canadiens forward and Delta resident Brendan Gallagher, Pacioretty’s former teammate, was quick to mention that “Patch went through a lot in Montreal.”

While Montreal are one game from advancing to the 2-21 Stanley Cup final the question remains – how many fans will be allowed in the Bell Centre for game 6? 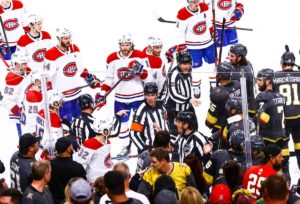