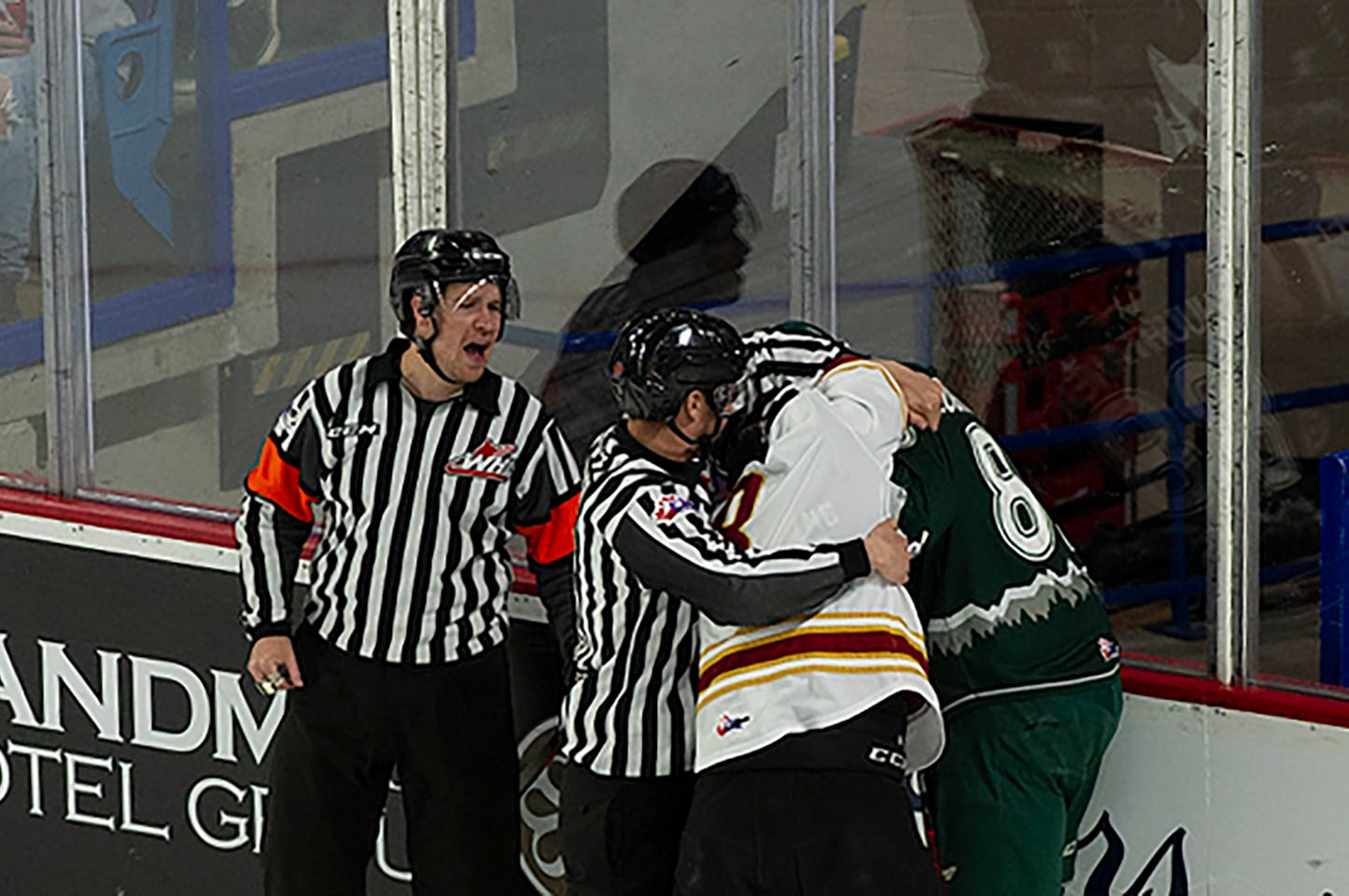 The season for the WHL Vancouver Giants has been a roller coaster ride filled with injuries, roster changes as well as fighting Covid issues related to the entire league

They managed to shock many by making the playoffs that saw them face Everett in a best of seven series.

To the surprise of some they pulled out a SO win in game one, but managed to drop game two before returning to home ice at the Langley Events Centre.

It was obvious that the Giants did there math knowing what their percentage would work in their favor for not only this game, but others as well

The game saw the “Tip’s” shock everyone in the building taking a 3-0 lead to the dressing room after one and never being able to recover from this deficit.

Try as they might they were only able to manage two goals on the night letting the squad from south of the 49th steal a 6-2 win in game three.

Game four would be a turn around with 3112 fans on hand cheering for the hometown boys with both teams wanting the early lead.

In this game it was Everett who took a 3-1 lead to the dressing room after one, but the second was far different from the first, which according to Laird was hard to explain

He mentions.the Giants managed a new single-game playoff record 11 goals in the 11-6 victory over the Everett Silvertips.

Jacob Wright responded with three of Everett’s six goals in a game where 15 different Giant skaters recorded at least one point.

Jesper Vikman was solid making 24 saves to secure the victory while the tandem of Koen MacInnes and Braden Holt combined for 19 saves for Everett.

Friday saw the Giants host Everett in game four of the best of seven series that was best described as one of the strangest games ever played by the Giants.

The game was played in front of 3112 fans with Everet holding a 2-1 series lead with both teams coming out hard in the opening period with Everett taking a 3-1 lead after one.

The second was when things changed for both teams with the fans getting their money’s worth,, which was one of the strangest games according to various  media members.

This game saw the Giants break a team playoff record scoring 11 goals while allowing Everett to get six of their own.

VAN – The Vancouver Giants took their first lead of the series at 3:18 of the opening frame. Adam Hall parked himself in the slot, and tipped home his team-leading fifth goal off an Ales Cotton point shot. Zack Ostapchuk had the second assist.

EVT – Jacob Wright tied the game for Everett at 5:11 on a two-on-one rush. Niko Huuhtanen started the rush during four-on-four play, and found Wright for his third of the series.

EVT – Wright wasn’t done. He finished off a tic-tac-toe power play goal off the rush for Everett at 8:30. The assists on the play were credited to Olen Zellweger and Ben Hemmerling.

EVT – Ryan Hofer then got in on the act for Everett at 11:16 when he knocked home his own rebound from the right side of the Everett goal. Hofer’s goal also came as a result of a power play with Ronan Seeley and Jacob Wright assisting.

VAN – Late in the period the Giants got a power play goal of their own from captain Zack Ostapchuk who followed up a Ty Thorpe rebound and tucked home his first goal of the series.  The goal came at 16:15.

VAN – 1:03 into the second period Ty Thorpe took a breakaway feed from Connor Horning and made no mistake. Thorpe’s first goal of the series tied the score at 3-3.

VAN – Then at exactly 5:00 of the middle frame, Alex Cotton’s one-timer from the left point made its way through Braden Holt and home.

Cotton’s second of the series was set up by Jaden Lipinski and Brenden Pentecost.

EVT – Everett tied the score at 4-4 at 9:48 when Hunter Campbell crashed the net, and got his stick on a loose puck that was sitting uncovered in the blue paint.

Campbell’s first goal of the series was set up by Caden Zaplitny and Aidan Sutter.

VAN – The Giants took their third lead of the night at 13:32 when Alex Cotton (once again) fired a one-timer from the left-wing point that snuck its way home.

VAN – Fabian Lysell (2) then gave the Giants a two-goal lead at 15:47 when he took a pass from Zack Ostapchuk, raced down the left-wing on a two-on-one and roofed a shot over the glove of Koen MacInnes to make it a 6-4 score.

EVT – 12 seconds into the final period, Jacob Wright (5) notched his third goal of the night off a Ryan Hofer feed to make it a 6-5 game.

EVT – Olen Zellweger then tied the score at 6-6 at 2:49 off a one-timer from the right-wing. Matthew Ng had the lone assist.

VAN – The game-winning goal came shortly thereafter at 5:55 from captain Zack Ostapchuk. The Giants captain parked himself in front of the Everett goal and redirected home an Alex Cotton shot for his second of the night. The second assist came from Connor Horning.

VAN – At 9:27 Fabian Lysell notched his second goal of the night on a backhand deke in close. Nicco Camazzola and Zack Ostapchuk both helped set it up.

VAN – The Giants then set a new single-game franchise record with their 10th goal of the night at 14:14. It came off an Evan Toth point shot. Adam Hall had the lone assist.

VAN – The game’s final goal came at 19:46 on a power play courtesy of Kyle Bochek. For Bochek it marked his first career WHL goal and was set up by Julian Cull.