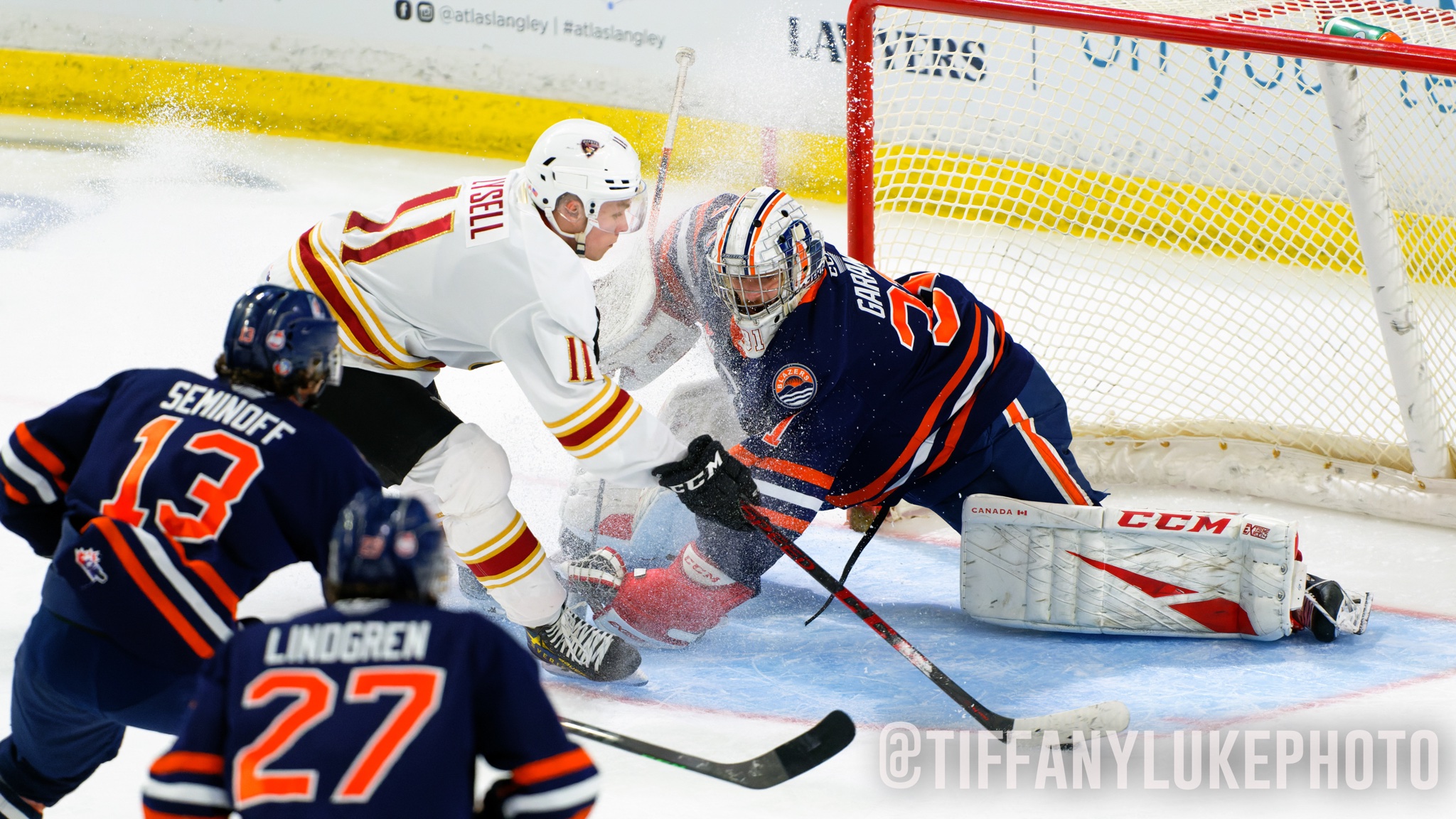 The G-men return home after dropping a pair of games against the Blazers in round two of the WHL playoffs and  are looking to get a win on home ice.

Playing in front of just over 3,000 fans, many who were cheering for the G-men with a few Blazer fans who made the three hour trip over the Coquihalla.

Some were under the impression that the game might be rough given the intensity level of play both teams had shown in game two, but the officials kept things under control.

The end result saw the G-men pull out a 3-2 win and is the first time that the Blazers were on the losing end of the final score considering they had swept Spokane in four games outscoring them 23-3.

The Blazers finished the season with 99 points, one behind the Silvertips who the G-men sent golfing for an early summer.

It’s important to remember that the Blazers finished 46 points ahead of the Giant’s who were in eighth place who went 10-1-1 over 12 games this past season against the G-men.

Say what you will the G-men have put the skeptics on hold for the time being considering that many, even WHL scouts had counted them out past the first round, but were they wrong!!

Given the coaching the Giants have on staff, we are really surprised that they have made it to the second round so far, but not everyone is as skeptical as others.

Considering that the Blazers were holding a 2-0 series lead they controlled the first part of the opening period jumping out to a 5 shot lead keeping the Giants off the scoreboard.

That would soon change with the tempo becoming more intense as Manitoba’s Justin lies opened the scoring at 11:53 having the Blazers to regroup, which they did.

The Giants held the lead for the remainder of the first and it wasn’t until 9:45 of the second when Fraser Minten got the Blazers even about two seconds after the Giants penalty had just expired.

Anyone who has watched the Giants this year knows it’s never over until the final buzzer and as penalties can prove costly it was Ty Thorpe who restored the lead on a PP goal four minutes later putting the Giants up 2-1.

The Blazers got one of their own as Drew Englot pulled them even at 8:38 of the third after he redirected a point shot for a PP marker.

While of another PP with Blazer forward Connor Levi in the sin-bin for high sticking at 16:27 it was Giant’s Alex Cotton who collected his sixth of the playoffs and leads all WHL defencemen in scoring (6 goals and 16 points) tying him in third among all players.

If you were ever looking to be entertained it was in the last 3.7 seconds of this contest that saw a chaotic goal-mouth scramble in the Giants crease.

At this point there was shoving, pushing along with rough play in the crease area as well as at the side that took a while to sort out.

After a delay the  play went to video review for the referee’s to sort out with the help of the video review box and somehow Kamloops was unable to slide/push the puck across the goal line.

The review took a long time to sort out with the referee with the phone and his finger in his other ear so he could hear what was being told to him.

It did seem to take “forever” to sort out that had some asking why they use a telephone for the referee, while the NHL gave the officials a  “real headset” to use, which makes sense.

After a long extended review it was determined that the puck did not cross the goal line setting up the final face-off which was followed by extended pushing and shoving with penalties assessed by the officials.

Following the game Giant’s bench boss Michael Dyck mentioned “It has been rolling like this for a couple of weeks now and even before that. We have been starting to build a lot of chemistry and a lot of belief in our group and I think they are just carrying it through.”.

He continued “(Belief) is everything. Without that, it is basically the paint on the target. Unless you have that vision, that belief, you don’t really have anything to play for and we knew we were getting a good two-way defenceman with obviously a lot of offensive upside; he is really bringing it in the playoffs right now.”

Final shots were 36-32 for Kamloops

Game four is Thursday in Langley with game five to be played in Kamloops on Friday (May 13), possibly an unlucky day for the Blazers.

Game six if necessary would be back at Langley Events Centre, Sunday May 15 with the puck drop scheduled for a 4:00 pm start time..