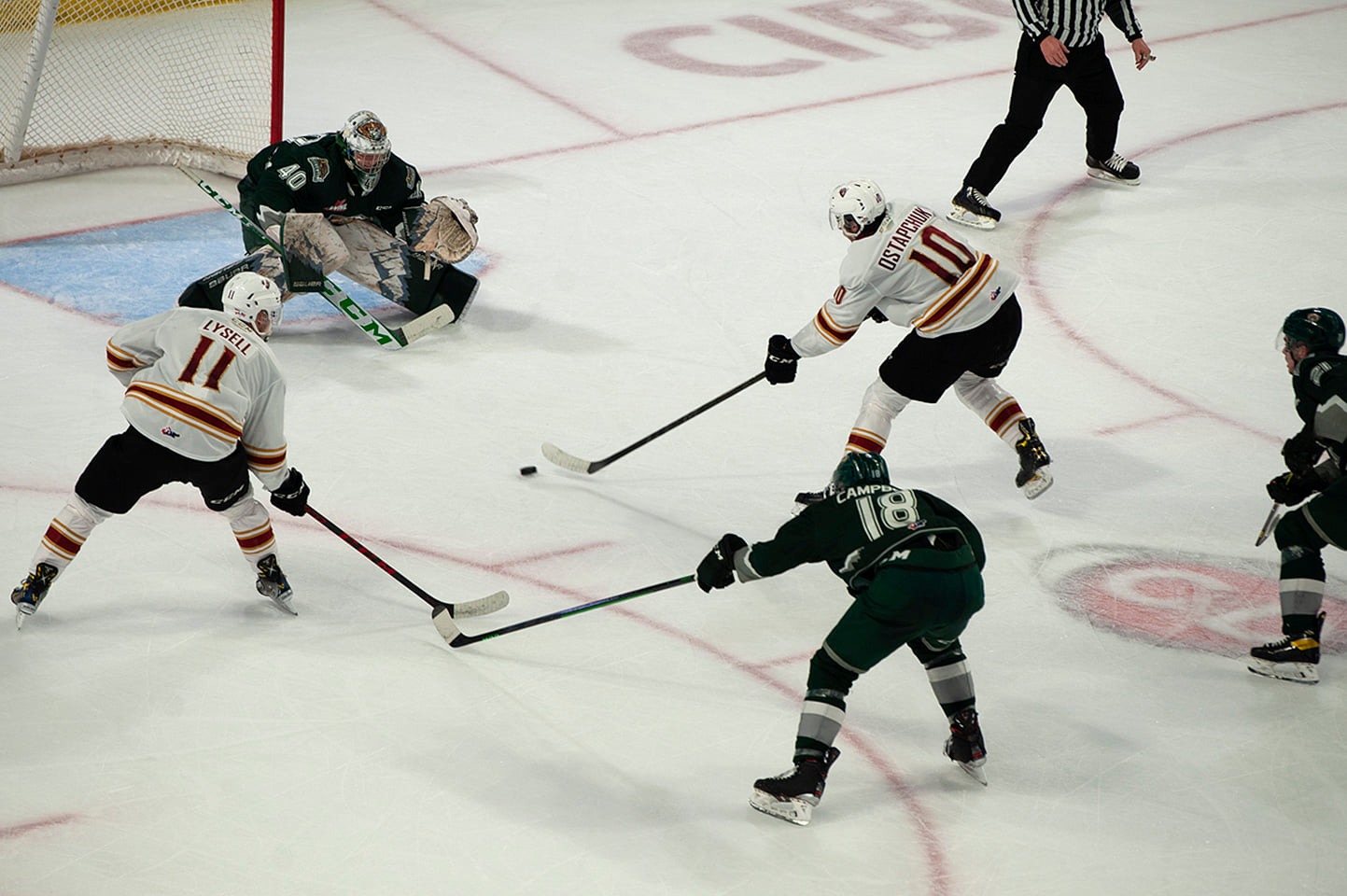 To the shock of some the Vancouver Giants have eliminated the Everett Silvertips in six games in the first round of the playoffs.

Pressure was on the Giants who were focused on making this a series eliminating the Silvertips who possibly took the series somewhat lax.

Points means nothing when it comes to playoff action as the Giants returned home holding a 3-2 series lead.

Pressure was again on the Giants who knew that game six could possibly be their final home game of the season if they allowed Everett back in the series with a win.

This was the first time since the expansion of the WHL to 16 teams in any postseason play that the eighth-seed eliminated a No. 1 seed pulling out a 6-3 win.

It’s interesting to know that the Giants won for the fourth time in six games in postseason play knowing that they managed only four victories over their final 21 regular season games.

Monday saw the Giants score  while on the PP that saw the 3322 fans cheer as Connor Horning scored 1:15 in the opening period.

The 3:15 mark of the first saw Alex Cotton put the Giants up by two (2-0) only to have Mazden Leslie give the home team G-men a 3-0 lead after twenty minutes of play.

According to some in the media box this was uncharastic for the Giants who had won only one of their last dozen games narrowly squeaking into the WHL playoffs.

Silvertip’s Ben Hemmerling got Everett on the board at 12:40 in the second only to have Giants captain Zack Ostapchuk give them the three-goal lead after 40 minutes.

Everett’s Ryan Hofer cut the lead in half (4-2) with the third coming to a close, while Giants Damian Palmieri and Adam Hall gave them the lead making it a 5-2 game.

The last part of the game did manage to get a “tad” rough, but the officials kept the game under control while the Giants rounded out the score of 6-3 to eliminate Everett.

The win allows the Giants to advance to round two taking on the Kamloops Blazers with game one and two to be played May 6th and 7th in Kamloops.

After the game Giant’s Head Coach Michael Dyck told the few media members “I think that we always knew we were capable of some pretty special things; it was just a matter of things falling in line. There were so many points during the season where you wondered if that was ever going to happen  and big credit to them (players).”

He continued “We got the start we wanted. Obviously, we wanted to get them on their heels and what a great way to do that. The first five minutes we made a push and never looked back.”

I had the chance to sit in the box next to the Ostapchuk family who were elated with his overall performance he had.

Fabian’s Dad, Henrik had  flown in from Sweden to watch his son play and wasn’t disappointed who was on the phone with his wife after the game outside the media lounge.

The pair along with linemate Adam Hall finished six games with a combined 14 goals and an overall 42 points.

He (Ostapchuk) was named WHL Player of the Week earlier in the day and led the three with 3 goals and 13 assists.

Lysell finished with 4 goals and 11 assists compared to seven goals and three assists for Hall.

Following the game Captain Ostapchuk mentioned “Very proud of every guy in that room. Everybody brought everything that they had all series long and it helped us. Solid team effort, game after game.”

He continued “I really think we just had to play a team game … you have to stick together and play the right way or else they are going to get you.”

It is interesting to note that the “D” helped with additional scoring combining with 10 goals, four that were game clinching goals.

The Giants PP scored on 12 of 32 chances (37.5 per cent), which saw them score on a man-advantage goal in every game.

Regular season saw the Giants PP finish at 17.7 %, which was ranked overall 18th in the league of all 22 teams.

Ostapchuk also mentioned “We are moving the puck around really quickly and finally starting to shoot, which I don’t think we did (enough) in the regular season. We are getting pucks on net, crashing the net, stuff like that and really tightened things up,”

Bench boss Michael Dyck went on to add “The power play) gave us a lot of momentum. I think we got connected. Momentum and confidence are a funny thing. It is not like we are reinventing the wheel here, we just got guys in the right spot.”

For those taking in the game; one could sense that Jesper Vikman continued to get better playing in five of the six games.

“We knew he was just going to get better and better every game and credit to him; he put a lot of work in to get back to this spot,” Dyck said, adding that the team felt he may have been done for the season.

The Giants advance to face the Blazers in Western Conference semi-final best-of-seven series with game one and two played May 6th and 7th.

The Blazers finished the regular season play (48-17-3-0) good for 99 points after sweeping the Spokane Chiefs in four-games.

The Giants host games three and four May 10 and 12 and if needed game five would be played May 13th.