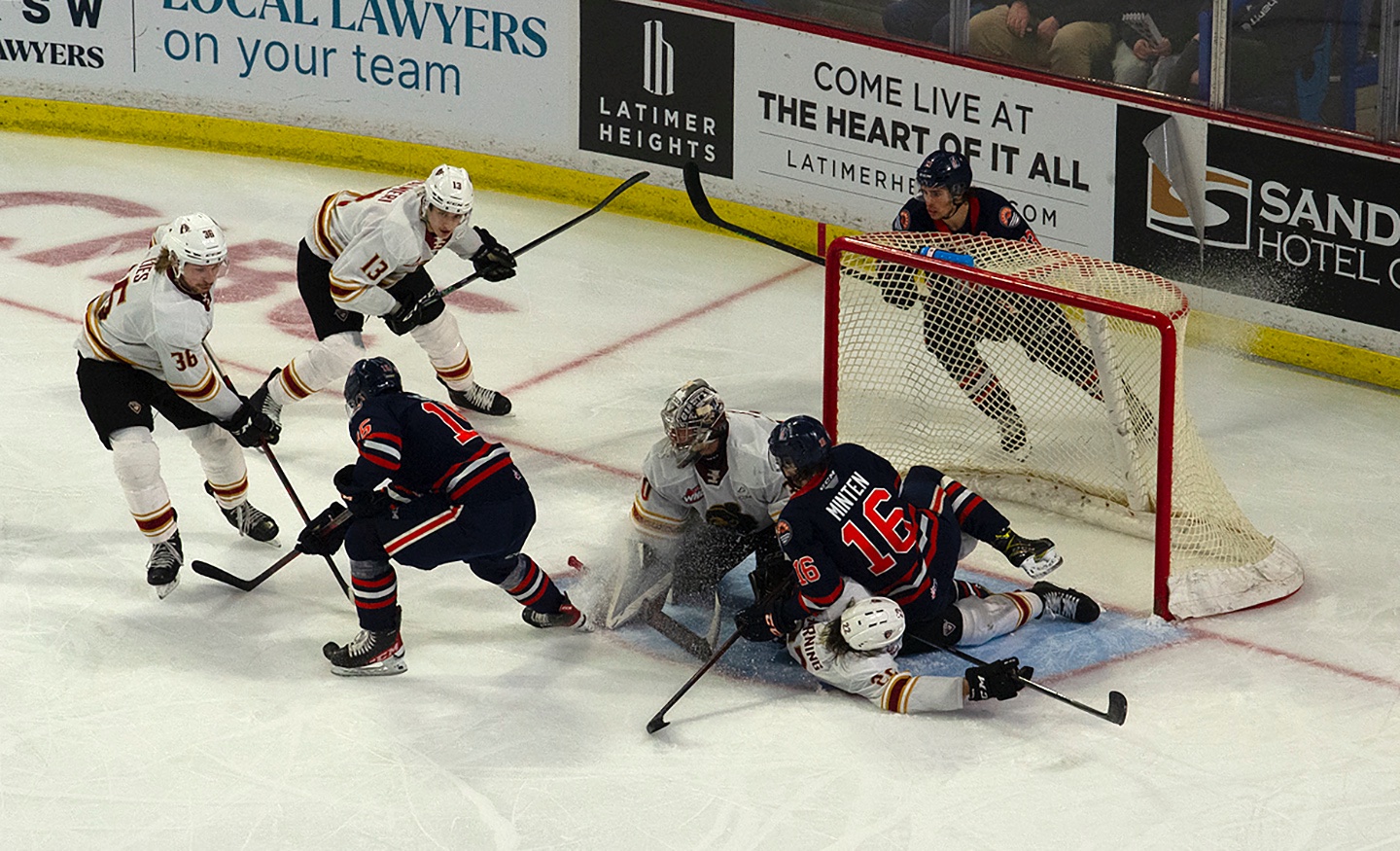 Many counted them out given the fact that their season came down to the wire sneaking their way in that saw them face Everett in the first round having one win in their last dozen games by one point.

As with each game the Giants have a “special friend” to turn the siren and in this game it was Alumni Garet Hunt who played with the G-men from 2004-08 and on the winning Giants Memorial Cup team in 2007.

With no pro hockey in the area and the Whitecaps playing the previous day in a match that ended in a draw it was no surprise that members of the media were on hand.

They shocked their rivals south of the 49h advancing to the second round facing the Blazers who finished one point behind their first round opponents with 99 points.

Playing games one and two were going to be a challenge for the team but they were focused under solid coaching of Michael Dyck and Keith McCambridge returning home to regroup.

Setting their sights on getting back in the series was not only winning, but proving to their loyal fan base that they are worth the price of admission, which they did.

They pulled out an impressive win in game three getting back in the series but dropped game four with the Blazers getting more chances pulling out the win.

Moving on to game five in Kamloops would be a challenge for the squad but they simply outplayed, out hustled the Blazers while playing a more disciplined game.

Returning home for game six would be one they would soon want to forget considering they never managed to get their first shot on goal until the nine minute mark.

The Blazers were the better team from the opening face-off breaking down the “D” of the Giants that saw Fraser Minten getting his 5th of the playoffs at 6:06 which also proved to be the game winner while playing shorthanded.

From this point the Giants never managed to climb out of the cellar with Kamloops taking a 2-0 lead on a goal by Toporowski at 10:27 despite being outshot 12-10 through 20 minutes.

The Giants came back out to start the second, but were never able to dig themselves out of the hole they were in only to have Daylan Kaefer put them up 3-0.

While the Giants were trying to rally the troops the Blazers got their fourth of the game a short 1:04 later that saw them control the remainder of the second holding a 4-0 lead after 40 minutes outshooting the Giants 25-16.

As if the crowd wasn’t silenced enough the Blazers came out in the start of the third the way they ended the second getting their fifth of the game at 1;05 with Toporowski getting his 9th of the playoffs while on another PP.

With the game counting down it was Giants Damian Palmieri tangle with Blazers Drew Englot who at first had the upper hand, but it was Palmieri who finished the altercation in fine fashion.

Try as they might the score proved too much for the Giants to overcome that saw the Blazers get their 6th of the game at 12:30 to seal the win for the Blazers as if five wasn’t enough.

Game six saw 4,310 fans on hand with followers from both teams, more supporting the Giants in what proved to be their final game of the season.

As with any sporting event we cover, I have the chance to chat with many fans who are always gracious and one such fan was Giants Captain, Zack Ostapchuk’s Mother Charlene La Rose Ostapchuk who brought her cheering section to all games.

While Zack was selected by OTT (2021) Round: 2 (#39), his Mother Charlene along with family and friends were solid supporters for all games and like others are sad the series ended.

Following the game Giants bench boss Michael Dyck told the media “Anytime you give up a short-handed goal, it is a dagger. I think we continued to play but I think we just ran out of gas.”

He mentioned “For the older guys, I am just glad they got to experience something like this. Nobody has really had any playoff experience and for the younger guys, this is gold: to learn how hard it is to win. You can talk about it, you can show videos from the NHL playoffs, but until you experience it, you really don’t know for sure.”

Kamloops outshot the Giants 36-24 and went 2-6 on the PP, while the Giants went 0-3 on special teams which could have changed the outcome of the game and the series.

The win advances Kamloops to the Western Conference championship round against either Portland or Seattle.

On behalf of the Sportswave crew we want to personally thank Dan O’Connor and Bill Wilms for their assistance over the season and wish them the best moving forward.

To the Giants organization thanks for being a “first class” organization and being based in the City of Delta.