One has to assume that the series between Tampa Bay and Carolina is unique having a twist to the Province of British Columbia where we are watching two BC coaches facing off against each other.

In our previous feature we focused on Prince George’s Jon Cooper who is facing off against Campbell River’s Rod Brind’Amour in round two in search for Lord Stanley’s Coveted Cup.

This year’s postseason NHL has two coaches with a connection to British Columbia home with Jon Cooper and Rod Brind’Amour was born in Ottawa; but grew up on Vancouver Island in Campbell River since the age of two.

Brind’Amour was selected in the first round of the NHL Entry draft (1988) by St. Louis and following the 1988-89 season he graduated from Central Collegiate Hockey Association when he immediately joined the St. Louis in the 1989 Stanley Cup playoffs in game 5 of their Division Semifinals against Minnesota that saw him score on his first shot.

While playing at Michigan State he was given the nickname or “Rod the Bod” for his fitness and conditioning routine during his playing years that saw him go from the game to the weight room staying and not leaving until the lights were turned out.

He began his first season with the Blues playing only 24 games scoring 26 goals finishing third in the team’s scoring which saw him named to the 1989-90 NHL All–Rookie team. 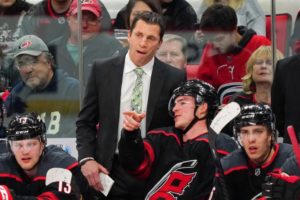 Following his short stint with St. Louis he was traded to Philadelphia after the 90-91 season along with teammate Dan Quinn for Murray Baron, and Ron Sutter, which was somewhat of a surprise to him.

When Flyers Captain Eric Lindros was injured and unable to play, Rod along with Kevin Dineen filled in as co-captains which saw him get the reputation as being one of the best shutdown centers when he was awarded the Frank Selke Trophy in 2005-06 and 2006-07 when he was a member of Carolina.

From this point on he built on his reputation as being one of the best shutdown centers in the league culminating with his abilities as a member of the Carolina Hurricanes was awarded the Frank Selke Trophy in 2006 and repeated the selection in 2007.

For those who are unfamiliar Campbell River is situated on the eastern coast of Vancouver Island and notably known as the ‘Salmon Capital of Canada’.

Following the Cup win it was brought from Vancouver to Campbell River where it arrived around noon June 25.

There it was met there by two of the many individuals who worked on the Rod Brind’Amour Cystic Fibrosis Golf Classic, the day prior.

The Cup was then  driven to the hotel where Rod and teammate Mike Commodore were waiting along with family and friends, where they were the centre of attention in a celebratory parade through the centre of Campbell River.

As one might expect living in small town Canada there were close to 6,000 plus residents lined up in Shoppers Row who cheered Brind’Amour and Commodore. 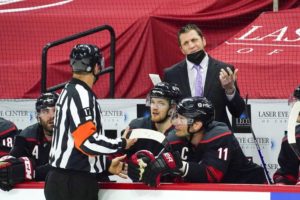 The parade ended at the Tyree Plaza, where acting mayor Roy Grant welcomed Campbell River’s favourite citizen by announcing that there would be a street named in his honour, which he was shocked to hear.

The street, named Brind’Amour Road, is located in a newly-constructed subdivision, at the corners of Jubilee Parkway and Highway 19A.

Following the ceremony Rod, Mike Commodore took the Stanley Cup and went back to the Brind’Amour family home where Rod’s father Bob, mother Linda and brother Michel, a Toronto police officer, were all waiting.

It’s always great to hear about athletes from “small town Canada” achieving success which in part should be credited to what I call “The Unsung Heroes” or the “Volunteer’s” in the community that donate many hours to help today’s youth.