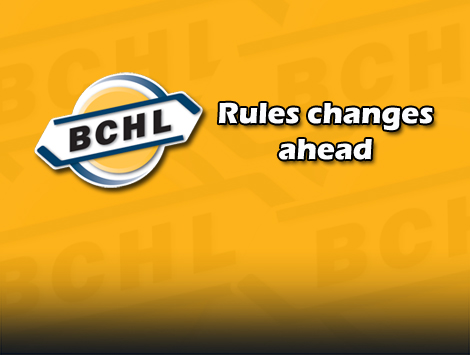 Each and every year we see changes to various sports rules that are all in place to make the game not just better, but also safer for the players and their families who support and cheer them on.

It’s true that many question some of the rules and quite often wonder why or who came up with the idea for the rule change, but they don’t get implemented with consultation from each provincial governing body.

Over the years I have seen changes with off-sides, icings, two- line passes as well as various rules and in keeping with these changes various leagues in Canada, mostly Junior hockey look at making changes for the betterment of their product that they put on the ice.

This year is no different as I am hearing that the BCHL are looking to implement various pilot projects when the BCHL begin’s it’s exhibition season on Sunday, September 19th.

The game will be played at the Q Centre in Victoria and will showcase the Alberni Valley Bulldogs and the Victoria Grizzlies and over the two week period the BCHL will play 47 games.

The league’s pilot projects are taking place during the exhibition season and all were put forward by the league’s Competition Committee and were given unanimous approval at a recent BCHL Board of Governors meeting.

During select games in the exhibition season, the BCHL will test a video review system.

This will be a precursor to having video review setup for goals and major penalties at the BCHL Showcase event in October.

The video review will be conducted through the Sporfie app and game officials will review on an iPad in the scorekeeper’s box.

Officials will no doubt have their hands full given the fact that they might have several reviewable calls to revisit, only due to pre-season.

During select games in the exhibition season, the Department of Player Safety will conduct a pilot on the efficiency of a coach’s challenge.

These instances will also be conducted through the Sporfie app and will be reviewed by game officials on an iPad.

Coaches in these games will have one challenge during the game on the following plays that led to a goal:

For the sake of the pilot, teams will not be penalized if the challenge is denied.

This rule is long overdue and I for one think it’ll be implemented during the season as it saves replacing the team centre with an untimely delay.

For all exhibition games, centremen will be given a warning on their first faceoff offence infraction, not an automatic ejection. Second offence is a minor penalty.