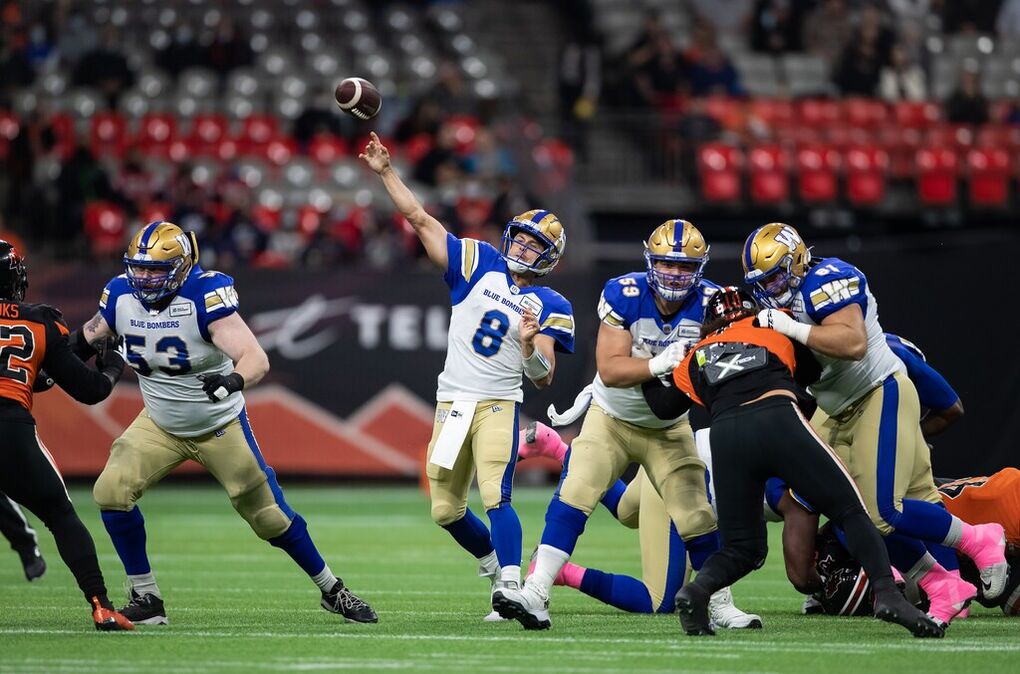 In a game that featured two of the league’s best QB’s it was apparent that the 12,500 fans at the  game would be entertained given the fact that the Bombers (7-1) are off to their best start dating back to 2011 were focused on controlling the 4-4 Lions on all areas of the field.

This night would see the Bombers “O” line dominate the Lions attack with Collaros controlling  the secondary managing 28 of 33 managing to pass for 414 yards as well as two TD’s.

Riley on the other hand spent the night looking for an open receiver, but the Bombers did their best to stop any rush that BC attempted to gain yards moving the sticks.

Anyone watching the Lions over the past while has to be impressed with the playing level of the roster, but probably two stand out more than the rest.

The game consisted of a battle between two exceptional QB’s who are both seasoned veterans in the league that had Reilly face his counterpart Zach Collaros who was the Most Outstanding Player, 2014, 2015 for Hamilton and played at the University of Cincinnati,

The mainstay of the team has to be the play of Kennewick’s QB Michael Reilly who is in his 10th year in the league having played 155 career games, 56 with BC.

The other player with the Lions who has made a huge impact on not only the club, but also gaining a solid fan base is wide receiver Lucky Whitehead who is in his first year with the Lions and second in the league.

He joined the league as Winnipeg Blue Bomber on May 9, 2019, where he played a role as a receiver and return specialist.

In his 15 appearances in 2019, he managed 521 yards for 52 passes along with two TD’s and in week three he collected his first breakout game in the CFL.

While both teams are extremely talented some attending the game have come to watch former Lion Adam Bighill who no doubt returns with a vengeance to prove a point.

He was a four-time CFL All-Star and five-time West All-Star with the Lions and was a member of their 2011 Grey Cup championship team. In 2015, Bighill led the CFL with 117 tackles and was named the league’s top defensive player.

BC started on the receiving end managing to gain one yard on the return followed by a loss of yards forcing BC to kick giving the Bombers their first chance, which amounted to nothing.

The ensuing kick wnt out of bounds keeping it away from Lucky who was set for a long return.

Reilly threw for a first down to Burnham gaining 44 yards for another first down that saw the first play gain a yard on the play.

Second and ten saw Reilly throw to Hatcher nailing a long pass to the 15-yard line with little pass protection in the back field, which eventually led to a 13 yard field goal putting the Lions up 3-0 half way through the first quarter.

The march down field saw a slow march for a long pass good for 11 yards to Harris giving the Bombers a second down on the 45 yard line.

Pass interference led to a first down for the Bombers on half the distance to the goal line followed by an incomplete pass leading to a second and five.

This set up a TD drive that saw a 73 yard kick returned for 38 with the Lions trailing 10-3 five minutes in the second quarter.

Rourqe replaced Reilly at the nine minute mark of the second quarter, but it was only for one play that had Reilly getting little pass protection from the “O” line.

While Reilly was getting little pass protection one play in the second quarter saw a challenge by BC for roughing the quarterback which was overturned.

The Bombers continued their drive setting up a 10 yard drive for 104 yards in nine plays taking a 17-3 lead at the half.

With the second half drawing to an end on a nine play drive the Lions managed a 47 yard field-goal trailing 17-6 at the half.

BC did have three drives managing to gain 73, 44 and four yards only to have them finish with FG’s of 13, 49 and 43 yards which was clearly not their best.

While everyone, or almost everyone was focused to watch Reilly it was Collaros tho stole the show and focused on winning the passing title since 2007 when Kevni Glenn managed to take over the CFL passing lead from Reilly.

This night saw the Bombers grab 508 yards of offence to the Lions 218.

Nathan Rourke took over for Reilly late in the last quarter and completed 55 yards while being sacked once while BC’s Jimmy Camacho went 4 for 4 for offence as the kicker making all three FG attempts, which included one for 49 yards.

Lions Lucky Whitehead was taken out of the game on the first play in the second quarter after being leveled by Bombers DB Brandon Alexander.

The Lions next home game is October 16th with the kick-off set for 4 pm.