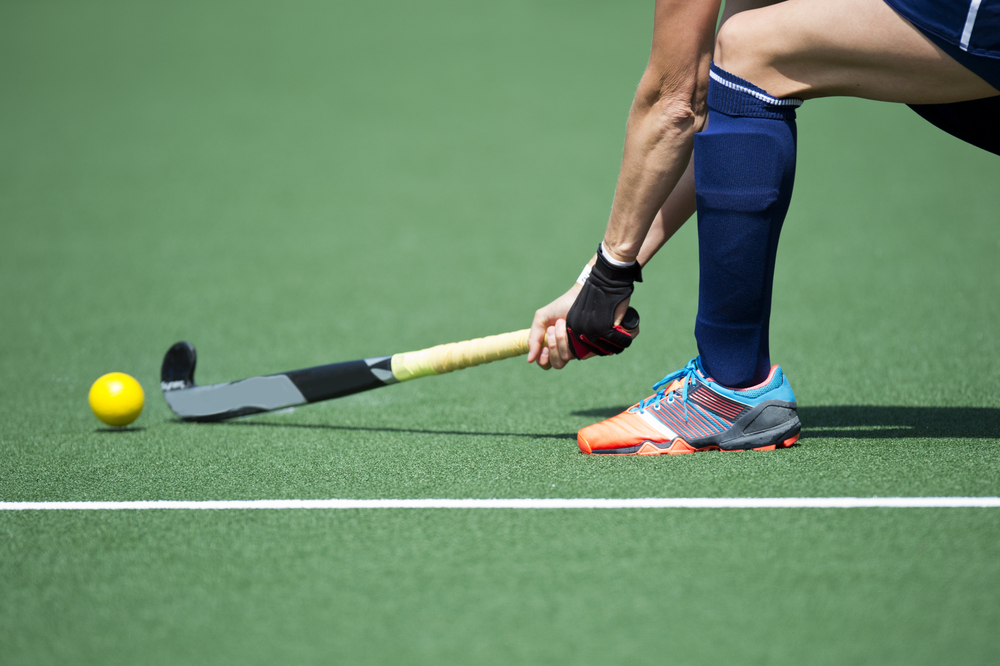 We were asked to post the last part of drills for those wanting to learn and understand Field Hockey and how you can perfect your skills to develop into not just a better player, but further Olympic Athlete.

Best for: Work on the flick pass for both accuracy and power.

Pair up two players of similar skill with a five-gallon bucket. Place the bucket five yards away from the players. Each player has 10 chances to ‘flick’ the ball into the bucket, getting one point for “goal” into the bucket.

Increase the challenge of the drill by increasing the distance of the bucket from the players.

Best for: Improving the ability to shoot off a speed dribble.

Set up two stations at each end of the field. Players line up along the 25-yard line and sprint in with a speed dribble. When they reach the striking circle, the player must gain control of the ball and take a shot at the goal.

Players are not allowed more than three seconds from the time the ball passes over the striking circle line to the execution of a shot. Players should practice a variety of shots at goal from bunts, flicks, slaps, and hits.

Best for: Improving the ability to shoot off a speed dribble and follow through.

Set up a goalie in the box and a line of strikers along the edge of a circle at each end of the field. Players must take a quick shot at the goalie, and then immediately follow the ball in case there is a rebound.

The initial shot at goal must be hard and followed by a quick sprint towards the goalie in case of a rebound. When the goalie clears the rebound, the player will pounce on it to try and attempt to get a second shot at the goal.

Best for: Working on pushing speed and power.

On command (whistle blow from the coach), the players must forehand push-pass the ball through both sets of cones to gain one point.

The drill is timed at 30 seconds so the players must try and get as many push-passes through both sets of cones in that time. The player with the most points for accuracy and speed wins.

Best for: Receiving a pass under pressure, working on accuracy and timing.

This drill requires three players. Set up four cones or pylons as a passing zone. A player (the receiver) runs into the passing zone with a defender on them.

Another player (a passer) accurately times a pass into the receiving area. The aim of the drill is for the receiver to pick up the pass without the defender breaking it up.

Best for: Accuracy and control of aerial passes.

Pair up players with a ball. Each player must try to lift the ball to their partner’s chest level.

The partner must then knock the ball down and control it with his or her stick. Increase the distance between the two players to make this drill more difficult.

Best for: Build accuracy and strength for shooting at goal from a distance.

Set up five cones or pylons at various distances and various angles. Attacking strikers will take shots at goals, changing between short shots and long shots until they finish all five shots. Players must use a variety of shots for this drill from bunts, pushes, hits, and slaps to flicks and defenders can be added to the circle to add pressure on the striker as in a game situation.

Best for: Continuing development of shooting skills, and goalie work.

Line up four balls five yards apart across the striking circle approximately 10 yards away from the goal. Players start at the first station and take a quick shot at the goal.

This drill must be done as fast as possible, and coaches must watch for technique, accuracy, and speed. A goalie can be placed in the box for an extra fast and challenging workout.

Two players of similar skill can pair up. The first player executes a controlled dribble in a set space.

The second player must try to knock away the ball from the dribbler using a jab tackle. Coaches must look out for the correct form on the jab tackle and focus on the timing of the tackle, which is key to a good tackle.

Best for: Learning the correct technique for various types of blocks.

Place three defenders at three cones or pylons in a line. The attacking player must dribble the ball to the first defender at the cone.

Best for: To learn more about different passing options.

Set up three cones or pylons as three different passing options for the offensive player. The player with the ball should always try to have three options for passing.

If defenders are covering the flat and through passes, then the attacking player may need to send the pass backward and attempt to set the play up again.

A player rushes down the sideline to a cone or a pylon that has been placed there. When they reach the cone, they must make a reverse push pass to another player that is sprinting down the middle channel, parallel to them.

The player on the sideline essentially “crosses” the ball to the middle player who can then take a shot at the goal.

Best for: Quicker passing to advance down the field.

Set up two drill areas for this exercise, depending on the number of players. Place the goal box or cones or pylons for goals on either sideline in between the center line and the 25-yard line. Choose two teams of five players. Players are not allowed to dribble the ball down the field – they have to move the ball down the field by passing and they are only allowed to touch the ball once.

Players need to keep their head up to see where they should pass next and they must not touch the ball until they are ready to pass.

If they touch the ball, the other team gets possession of the ball from that point.

Set up three sets of two cones or pylons 25 yards apart spread equally across the 25-yard line and the centerline. Players are split into teams of four.

The object for each team is to defend the three goals on their side. They must also try to score three goals against their opponents.

The key elements that coaches should focus on in this drill are good passing to spread the offensive team out and strong defense.

Best for: Learning to pass and react quickly.

The first player begins with the ball in the center and passes to the second player on the left and then sprints forward towards the goal.

The second player passes to the third player, who then passes it to the first player in the circle who then takes a shot at the goal.

The second player must take up a defensive position and the third player can follow up for a rebound.

Repeat the drill until all three players have had a chance to play each position around the circle.

Best for: Conditioning, ball control, and dribbling skills, working together.

If a goal is scored, the last two attacking players to touch the ball will move to defense, and so on.

Best for: Transitioning from offense to defense, simulating game situations.

Use the field between the 25-yard line and the centerline from sideline to sideline and mark off a goal area with cones or pylons. Place seven players into each area and have four players starting on offense.

These players will attack the three defending players. If one of the four attacking players scores, the scorer moves to the defending team and plays defense, switching it to 4-on-3 the other way.

If the defenders take the ball away before the attacking team scores, then the last three attacking players to touch the ball will go on defense.

This drill can be made even more challenging by making it a 5-on-4 game or by adding a one-touch element so that the players are only allowed to touch the ball once before passing it.

Best for: Transitioning through zones and teaching good discipline.

Divide the field into three zones with one offensive and one defensive player in each zone.

One team begins with the ball and has to dribble through the three zones to try and score against the opposing team.

One player is allowed to move through all three zones on the field and play for whichever team is attacking. The object of the game is for one side to try and score more goals than the other side.

Best for: Competitive Team Drill – promotes aggression and power play on the field.

Divide the team into sides with six players in each – one attacking team and one defending team. Only one-half of the field needs to be used for this drill and there can be a goalie in the net, but it is unlikely many shots at goal will be taken if the drill is conducted correctly.

The defending team must also be cognizant of passing lanes to spread them out.

There is also a time limit – the offensive team has just 15 seconds to penetrate the striking circle, or a point is awarded to the defending team.

Best for: Making the mental transition from defense to offense.

This is known as a breakout play.

If the defender cannot make a good pass, they must use a short, flat pass to one of their defending teammates who then takes a quick long hit pass.

The attacking players must try to intercept the long pass.