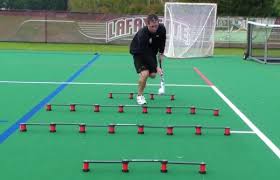 Last week we focused on skill development for Field Hockey and due to popularity of those involved in the sport we offer part two of our three part series for beginners as well as seasoned players.

Best for: Changing speeds while controlling the ball.

Players line up along the 25-yard line and the coach stands on the centerline. On command – a whistle blow – players loosely dribble the ball while sprinting.

When the coach blows the whistle again, players must pull the ball back, gain control and then speed dribble again with the ball under control.

The coach continues to blow the whistle every time they want the players to change speed. If any of the players lose control of the ball, they are eliminated from the drill.

This is a fairly simple and straightforward drill. Set up two or more stations each with five cones or pylons in a line.

Players must move the ball in a controlled dribble through the course, alternating the sides on the way up. When players turn at the end, the ball must be moved around the end cone with control and then the drill repeated on the way back to the first cone.

This drill can be run as a relay with four or five players in a team at each station and racing each other to finish first.

Intermediate: King (or Queen) of the Circle Drill

Create a circle with cones or pylons about 15 yards across. All players must be in the circle, each with a ball. The players have two challenges during this drill – they must protect their ball while at the same time trying to put the ball of other players out of play.

On a whistle blow from the coach, all the players must dribble their balls around the circle, moving at pace.

Best for: Teaching players to control the ball, while keeping their head up.

Form five lines of players all starting on the 25-yard line while the coach stands in the middle of the centerline.

On command (whistle blow from the coach), the first line of players dribbles to the centerline towards the coach with their heads up, watching to see which way the coach points his/her arm.

When the coach points left or right, the players must change their direction at a 45-degree angle without losing speed. For an extra challenge, players must perform a dodge or a fake before changing direction.

Advanced: Spin Around the Cones Drill

Best for: Develops the spin move – an advanced ball control skill for players to elude defenders.

Place three cones or pylons in a line about 10 feet apart. A player dribbles the ball at speed towards the first cone.

They make a quick jab step, and, while maintaining control of the ball, spin around and move to the other side of the pylon.

At the next cone, the players alternate the side of the spin. Several stations can be run simultaneously.

Best for Developing and perfecting the scoop, and ball control.

Players team up with one ball between them. The offensive player will dribble with the ball towards the defensive player.

When they are close to the defender, the player with the ball will slow down, drop their right shoulder, lower the left hand so the stick is angled back with the face of this stick toward the sky. They will then “scoop” the ball over the defender’s stick – just high enough to avoid the pressure, but not so high as to lose control. Players then swop and play the opposite position.