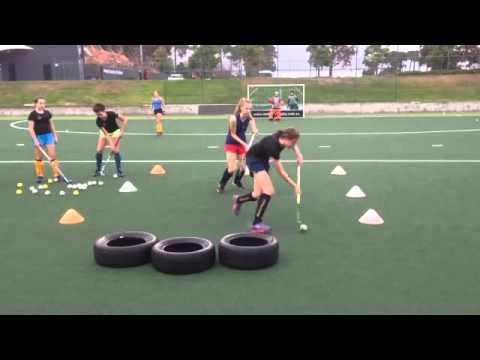 Part three of our series we have had various comments on how this has helped and not hindered various players to better themselves.

Best for: Helps players build their offensive versus defensive skills.

Create a square with cones or pylons each of which must be about 10 yards apart. Five defenders stand in the square and one player on offense.

The defenders must be prepared for the offensive player to come into the square and use a range of defensive maneuvers and evading tackles to try and get past the defenders, one at a time.

The offensive player will only meet one defender at a time and the defenders must offer little resistance.

Best for: Works on ball control going in four directions.

Set up a square with cones or pylons and players begin at one cone or pylon. Players must follow this sequence for the drill:

This drill combines several dribbling skills and a variety of ball control skills.

Passing and receiving are fundamental skills in field hockey and not only control the pace of the game but can be used in tactical ways to tire out the opposition and lead to the success of your team.

Passing and receiving drills help players to build the skills they need to confidently and accurately pass the ball to each other and improve their receiving technique, whether from an aerial pass upfield to a powerful slap pass onto their reverse stick.

Best for: Fundamental drill for learning how much strength to put on a pass based on the distance a person is away from the passer.

Players stand five yards apart when they first pass. Players must adopt the correct passing technique. Once each player has passed once from the five-yard distance, they each take one giant step backward and pass again.

They continue this passing and step back until they are 25 yards apart.

Beginner: Inside the Circle Drill

Best for: Developing the shooting technique from all angles for players, and goalie work.

Players line up around the circle with a ball and take shots at goal. Players can practice a variety of shots from pushes, bunts, hits, slaps, and flicks into the goal.

This is a great drill for all levels of players to practice their shooting technique and gives goalies a great workout too.

Best for: Stringing together dribbling, dodging, and shooting skills for a game.

Line players up outside the striking circle each with a ball. Place a cone on the edge of the circle. One at a time, players move with the ball towards the circle with a controlled dribble.

When they reach the cone, the player must execute a dodge around the cone and take a shot at the goal. Players can try different types of dodges to get around their “defensive opponent.”

Players can pair up to work on the three different passes – the push pass, the reverse push, and the hit. Players simply pass to each other in this fundamental hockey drill and the coach watches for proper technique and body position.

The distance can be increased along the way by players taking one large step backward when they have mastered all three types of passes at a certain distance apart.

The final part of the four part article will be posted on Saturday.