Provincial guidelines are still in place for travel throughout BC and to no surprise everyone is looking forward to getting back to the open spaces after the long weekend.

Over the past while we have covered the Harry Jerome Track Classic event at Swangard Stadium and one season at the Coquitlam at the Percy Perry Stadium which officially opened in 1991 for the BC Summer Games.

While everyone waits for the return no one wants the return more than the athletes who have been training at various centres to keep their skills up to the standard required to achieve Gold.

The Achilles Track and Field Society has organized athletics competitions since September 19, 1964 when Harry Jerome won the Gold medal at the International Olympic Preview at Empire Stadium as the Canadian team departed for the Tokyo Olympic Games.

Harry Jerome made history by winning a Bronze medal in the 100m and became the six (6) time world record holder in the sprints but sadly passed away prematurely in 1982.

In an effort to reduce the risks, the event will be held at 3 locations,

Swangard Stadium, in Burnaby, the Rashpal Dhillon Track at University of BC, Hillside Stadium in Kamloops. 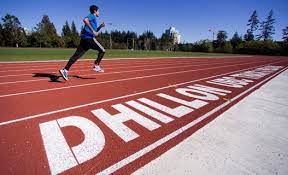 Canadian track and field athletes have faced disruption of training, travel and access to competition needed to attain the very tough Olympic standards required to qualify by World Athletics.

Covid-19 creates an inability to know what is coming next and the deadline to organize the event is looming.

Achilles Director and meet director, Nigel Hole is awaiting the potential revision of British Columbia Public Health Regulations on May 25.

Loosening of travel restriction to allow travel between the interior and the island with the lower mainland would be ideal.

The Olympic Trials set for Montreal on June 23-27, will be followed by the closure of the qualifying window on June 30. 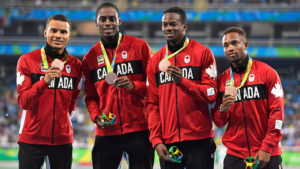 Athletics Canada will nominate Canada’s Olympic team members to the Canadian Olympic Committee for ratification to travel to the Tokyo Olympics which start July 23.

Over 3 dozen Canadian athletes to date have met the demands of the complex selection process to be nominated by Athletics Canada.

Each event for athletics in Tokyo has a set quota or maximum for entry.

If athletes with the Olympic standards do not complete the quota, the remaining spots are filled using World Rankings as of June 30, 2021.

Currently several Canadian athletes sit in this bubble of uncertainty.

They may rank with in the quota now but will be subject to athletes from around the world seeking to move their own ranking up.

Hence every result counts until the end of June.

World Athletics updates are at https://www.worldathletics.org/stats-zone/road-to/7132391