After a slow start at the 2021 IIHF World Hockey Championships Team Canada completed an incredible game comeback winning the World Championship tournament in Riga Latvia with a 3-2 win over Finland.

The incredible comeback saw them get the winning goal playing three on three Sudden Death (Sudden Victory) O/T winner as Ottawa Senators Nick Paul got the winner at 6:26 completing the comeback.

This marked an amazing tournament turnaround after dropping their first three game’s of round robin play winning their last four games making the playoffs.

The remarkable finish ended with a 3-1-0-3 record qualifying for the playoffs in fourth place in Group B. 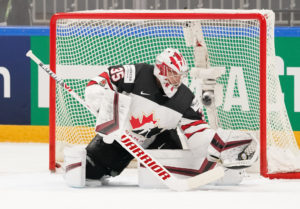 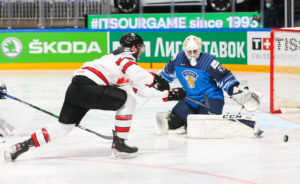 Following the early losses they found their skating legs and confidence winning key game’s gaining momentum knocking off Russia 2-1 in the quarter finals.

This was followed up in a game against the United States which they pulled off an impressive 4-2 win moving on to play Sunday in the final.

The Gold medal game saw Finland open the scoring at 8:57 with Ruohomma Mikael putting one past Coyotes “tender” Darcy Kuemper giving them the 1-0 lead after twenty. 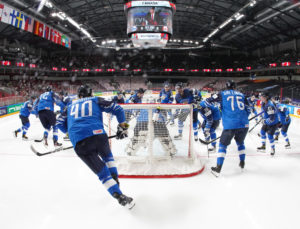 The first ended with Justin Danforth assessed a Misconduct at 4:15 with the shots tied at eight after 20 minutes.

Canada rebounded in the second with Anaheim’s Comtois Maxime scoring at 4:30 with Connor Brown and Sean Walker giving Finland all they could handle.

The second ended with Finland outshooting Canada by a narrow 9-8 margin, leading 17-16 after two.

Finland regained the lead at 5:47 of the third on a goal by Lindbohm Petteri and Kim Nouslainen and Mikael Ruohomaa getting assists with time alone working against Canada.

Canadian continued to press only to see Sean Walker assessed a Misconduct at 48:38 taking him out of the line-up for the remainder of the game.

Finland’s Mikael Ruohomaa was assessed a minor for tripping at 52:19 putting Canada on the PP that saw them get the equalizer at 52:37 with Ducks Adam Henrique with Comtois and Brown getting assists on the play as time was winding down.

The third saw Finland outshoot Canada by a 11-7 tally for a three period shot total of 28-25 for Finland after sixty minutes of play.

Overtime at this level of play continues to be controversial, but regardless of our thoughts they continue to play three on three rather than the five on five which makes more sense to everyone else.

Canada won the draw in their own end that saw both Nick Paul and Connor Brown have a 2 on 1 entering Finland’s zone which saw the two work a give and go play.

The play seemed to dazzle both the “D” as well as Finish “tender” Jussi Olkinuora at 66:26 giving Canada GOLD!!

In addition to Canada pulling off a shocking win in the final championship game, being from the west coast we want to mention that Vancouver Giants Head Coach Michael Dyck added another International medal to his collection. 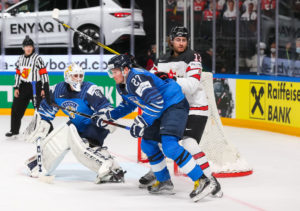 During his three seasons as bench boss with the Giants, he has led the team to an overall regular season record of 92-49-11.

Impressive – yes indeed and when you reflect on his entire WHL coaching career, he is 224-169-27 as a head coach.

His success takes him back to his day’s with Giants first Head Coach Don Hay and entering the 2016-17 season has spent 1,216 games behind the bench; amassing an impressive record of 675-442-99 and is first in all-time playoff wins with 106.

Canada’s journey to the championship game was an adventurous one, as they began the tournament with three straight losses before finishing 3-3-1 in the preliminary round.

Were it not for a 2-1 regulation victory for Germany over Latvia on June 1st, Canada would not have advanced to the quarterfinals.

From there, Canada caught fire, earning a 2-1 overtime victory over Russia in the quarterfinals on June 3rd, and then a 4-2 victory over the United States yesterday in the semi-finals, before clinching their gold medal today. 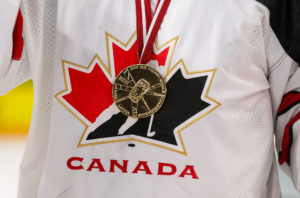 Rosters can be found at the IIHF.