Given a dose of reality all sports takes various twists and turns in both pro and amateur alike, but when one team has dominated in the stats department some are in shock, but it’s never over until the final

Cleveland returns after an 18 year absence, but it should be noted that the Browns are out playing the Steelers and some might chalk it up to lack of practice time.

The Browns have key players out of the line-up while the Steelers’ have lost Joe Haden, Devin Bush and Bud Dupree.

The first half while playing on offense saw Pittsburgh lacking the playmakers that helped them make the playoffs through four straight years running from 2014-17.

This in only the 4th time in Steelers history they have allowed 35 points in the first half and first dating back to 1968,

The last time the Steelers came back from a 28 point deficit in the playoffs was in 2013, but this game saw the Browns Joseph jump on a fumble recovering to march in for the first TD of the game putting them on the board.

The second TD of the game saw Mayfield throw a 40 yd TD to Landry who marched in the end zone at 9:46 that took three plays for 46 yards.

Following this saw the Browns take six plays at 4:40 that saw Hunt run 11 yards for the third TD of the game going six plays for 65 yards heading down field. 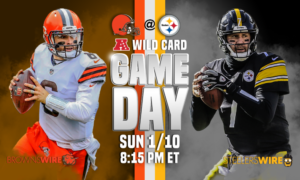 As if three wasn’t enough the Browns continued to romp down field for a 8 yard rush taking three plays for 15 yards.

The first quarter ended with the Steelers in shock of their play through 15 minutes, but managed to get a fast start in the second quarter as Connor ran in at 1:44 over 13 plays for 89 yards.

With the second quarter wrapping up it was Mayfield who threw one to Hooper in a play that took nine plays for 64 years making it 35-7 for the Browns.

The last play of the second quarter saw Boswell kick a 49 yd FG ending the first half retiring to the dressing room to refocus.

The Steelers managed to get two TD’s in the third as Ebron and JuJu Smith-Schuster marched in for majors making it a 35-23 game.

The fourth saw Chubb run 6 plays for 80 yards after taking a pass from Mayfield for the major making it a 42-23 score with time going against the Steelers.

After watching an entire game it was nice to see Claypool take a 29 yard pass to run it in for the major making it 42-29 with the Browns still in control.

Injuries continue to plague the Browns having players that have never practiced with the Brown’s, but don’t look out of place.

It’s interesting to note that with five minutes remaining the Steelers have 461 yards to the 389 for the Browns still in control with 4:28 remaining in the 4th as Parkey kicked a 24 FG that took 13 plays for 59 yds.

With time against them Steelers QB threw his 4th interception giving the Browns the chance to march in for another major putting them in full control of the game that had a 37 yd FG on 6 plays.

Shock is the only word that best describes the Steelers in a game that if anything could go wrong, it would go wrong and one has to wonder if confidence played a role in this loss.

Simply put this was all Cleveland which full credit must be given to all the players who bought into the game plan.

If you are in shock about the Browns win, let’s see if they can carry their momentum as they head into KC to see who will come out of the semi-final game.

Abbotsford’s Claypool gets what was the final TD of not only the game, but the final game of the season for the Steelers.

In a last ditch play the Steelers tried an on-side kick that went 10 yds but were unable to recover the ball giving the Browns the chance to add points on the board.

The last time the Browns lost a road game dates back to 1969 which was the team’s 20th season with the National Football League and the last before the 1970 AFL-NFL Merger.

Final score of the game was 48-37 for the Browns now having the confidence heading into next week.