Some call it boxing and others call it mixed martial arts, but regardless of who you ask about the upcoming bout, others call it whining between to so-called Adults.

The gloves are off and as many are placing bets on the fighter of their choice (go to casino-bonus.me.uk to find the best bonuses and sign-up offers), we know one thing and that’s the fact that either 40-year old Floyd Mayweather Jr. or 29-year old Conor McGregor will hold up the belt when all is said and done.

It’s a battle between two completely different sports with one being MMA and the other being Boxing, with most or some asking what type of gloves will each opponent use or will there be one specifically designed for this made-up match?

It’s like kids who want to kick everyone out of their sandbox and stand tall taking all the glory and let’s not forget the huge payday for each fighter.

August 26 will see Mayweather who has a perfect 50-0 record taking on Conor McGregor, the MMA superstar who feels that his style is better than any other ever seen in the ring.

Mayweather who cut ties with Bob Arum promotion team has for the last while controlled everything with his own career, which includes picking and choosing fights that work for him alone and also making sure he get’s a bigger payday.

Realistically this fight has everything right for Mayweather and many think the deck is stacked in his favour and should he pull off a win or an upset he can simply retire and leave his pro boxing career on the canvas without going extra rounds with anyone.

The press event in Toronto had Mayweather thinking that Mc Gregor might have more fans in his corner, but the Irishman knows that he’s not just along for the ride or a payday.

He (McGregor) does have a certain amount of charisma and is being himself while one might say that Mayweather is a bit of an egotistical individual who has a huge ego.

Given all the recent media hype now we are hearing that Mayweather has let out with an anti-gay slur on McGregor in his final press conference and not just any conference, but a jam packed stadium in front of young and old alike.

Mayweather for my money is like a “spoiled brat” who wants his own sandbox and won’t settle for anything less.

The tour is over and while it’s mostly hype one has to ask why any individual who kids (some but not all) look up to has to come out with terms that are racist and indicates he has no respect for his opponent, let alone the human race.

Someone needs to have a new script writer as it seems that he has run out of material and uses lines somewhat those in politics do, constantly changing the concept of the story on a daily basis.

If this was track and field and they were to go over the bar, Mayweather found a way in which to crawl well below the bar, no matter how high or low it was set.

Mayweather told the media “They know what my number is, a guaranteed $100 million and we’re the A-side and I don’t really know how much money he has made before, I’m pretty sure he hasn’t even made $10 million in an MMA bout.”

He continued “But we are willing to give him $15 million and then we could talk about splitting the back-end percentage on PPV. Of course, we’re the A-side. How can a guy talk about 20 or 30 million if he’s never even made 8 or 9 million?”

McGregor’s highest disclosed purse for a UFC fight is around $3 million, although by the time his PPV bonus was factored in, it could reach an estimated $8-$10 million.

He is set for a guaranteed $15 million that would be the biggest payday of McGregor’s career so far.

You tell us who the winner really is and regardless of the outcome, it’s somewhat like going to Disneyland with your Grandmother, but in this case they all get richer. 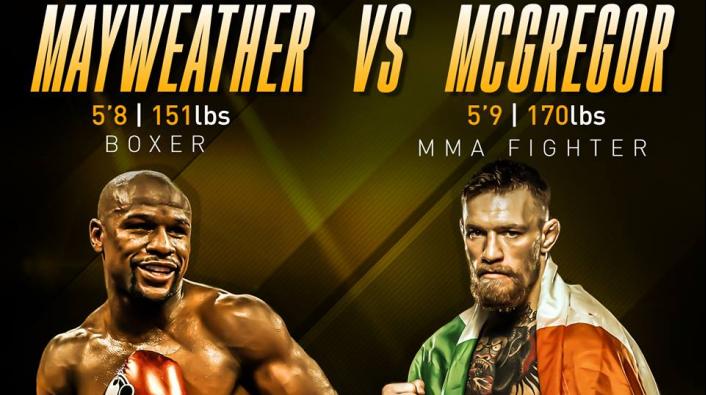