BCHL Board Of Governors Approve Sale Of Surrey Eagles 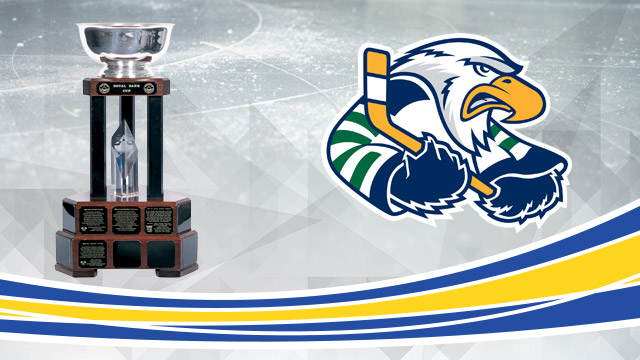 The rumors have finally been put to bed as for the past while the talk of the town was that the Surrey Eagles were looking for new owners.

Put your cheque book back in your wallet as the sale has finally been approved by the Board of Governors of the BCHL unanimously after a vote over the weekend.

Previous owner Chuck Westgard was the sole owner, but over time others were invested in the club with him, but moved on.

Over the past couple of years we have been hearing rumors that the Eagles and another lower mainland team were on the market and now one sale has been finalized.

The other rumor still persists but as one might expect all is quiet on the BCHL home front with nothing further coming  out of league meetings.

The Eagles new ownership are to local businessmen Ron and TJ Brar who are taking control and immediately take over operation of the team and continue to operate out of the South Surrey Arena.

The Brar’s own and operate Evergreen Herbs, a Surrey-based business that has grown into a leading provider of fresh herbs and vegetables to grocery stores across the country.

Ron Brar mentioned “My brother and I were born and raised in Surrey and that’s where our passion for hockey first started.”

He continued “Our love for community and family has always played a significant role in our lives. The Surrey Eagles will allow us to continue to grow and to give back to our cherished community, and we want to encompass our priorities around hockey, academics, community and most importantly, building new leaders.”

“We are grateful to Chuck Westgard and the BCHL family for allowing us to be a part of the best junior hockey program in Canada.”

Westgard mentioned “The last 12 years as owner of the Surrey Eagles has been quite a ride and from the first season in 2010-2011, the RBC Cup in 2013, right through this final season, our goal has always been the same.”

He continued “We wanted to provide a safe and enjoyable place to live and play for all of our players, and to provide the best coaching possible to give them every opportunity to chase their dreams in the sport they love. Most importantly, we wanted the players to develop as individuals to become contributing members of society.”

Chuck went on to mention “The time has come to hand the team over to a new ownership group, full of energy and enthusiasm, to continue the proud tradition of the Surrey Eagles. I am confident the Brar brothers will carry forward that tradition well into the future.”

Graham Fraser, Chairman of the Board mentioned “The BCHL Board of Governors are excited to welcome Ron and TJ Brar as the new owners of the Surrey Eagles and the Eagles have a rich history in our league since arriving in 1991 and we are confident that the new ownership group will continue this legacy.”

“We would also like to extend our appreciation to Chuck Westgard who has been a great asset to our league in his 12 years as owner of the team. We wish him nothing but the best going forward.”

It’s understandable that changes will be made and with new ownership – change in all areas will bring a winning culture to the community as well as new ideas for the success of the team.

Sportswave welcomes the new  ownership and thanks Chuck, who I know personally from his minor sports days in North Delta.

Thanks Chuck and all the best moving forward with the Family from Laird Allan and myself.