It’s not often that you meet someone that you can call a friend in the true sense of the word, not because you hang out every Friday night, but rather the manner in which you can interact with each other at various events.

Such is the case of longtime basketball coach for the Pitt Meadows Marauders Air Force. and here’s an article I posted in 2017.

Being involved in sports such as I am, I see many individuals who get involved in sports for the wrong reasons, but Rich was nothing like that, he was passionate, dedicated and had a will to pass on what he had learned throughout his career to today’s youth to not only help them become better players but also better citizens.

He was a breath of fresh air when it came to talking sport as he told you the way it was and never once “sugar coated” anything for any member of the media.

Rich Goulet was the one that spent decades providing today’s youth not only the skills, but what it takes to reach goals you never thought you could ever achieve in your chosen sport.

Lawrie Johns, Executive Director of Basketball BC mentioned “The only other person I can think of is Bill Disbrow, who won five B.C. championships with Richmond High” continuing on to mention “It was Goulet’s first year of eligibility.”

It was simply a no-brainer to have him inducted as he’s done just about everything you can do at high school basketball and it’s not just longevity, it’s about results.”

He (Goulet) was three BC titles to his credit, and was the first high school coach to win a provincial championship at both the AA and AAA level.

Some time ago he marked his 1,000th win as coach of the Pitt Meadows Senior Boys’ Basketball team that saw the Marauders post their winningest season in school history by winning the Fraser Valley Championships.

He (Goulet) estimated he coached close to 4,000 games, while also taking into account the games he’s coached at the Grade 8, Grade 9, and the Junior level, which included St. Thomas More, Basketball B.C.’s Provincial teams, the Steve Nash League as well as spring league exhibition games.

While he was with the Pitt Senior squad, he coached over 1,500 games while managing to maintain a winning percentage of over 60 per cent in total.

Personally for him the award is only a further recognition of the countless hours spent coaching the boys of Pitt Meadows, many of whom grown to have children of their own while still living in the surrounding area but his biggest satisfaction as a coach is running into his old players, and seeing the success they’ve had in life.

The key to Goulet’s coaching philosophy has always been to hold his players accountable, and not just accept “good enough.” While it may be difficult for many teenagers to understand that at the time, the lessons pay dividends down the road.

As a dedicated teacher coach, Goulet is a vanishing breed, says Johns.

Honestly speaking from a broadcasters perspective Rich was extremely professional being open to any interview I asked of him and no different from other coaches, he “Disliked foolish questions due to a lack of understanding of the game” as he once mentioned to me.

Rich will be truly missed by everyone he touched throughout his or their life time, but now he’s coaching a Team of Angles for God’s team.

RIP Rich you are truly missed!!!! 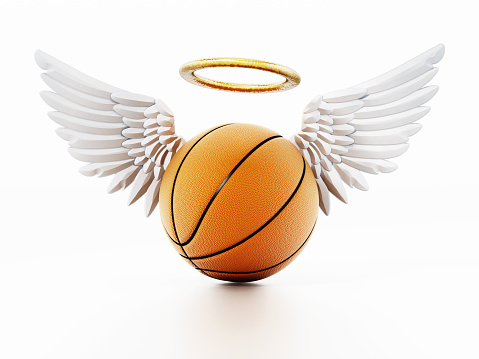 Basketball with angel wings and gold halo isolated on white.